Kaine Makes the Case for Hillary Clinton to PSU Students 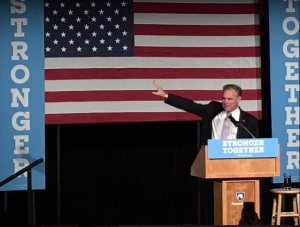 At the event, Kaine spoke about why he and Clinton are making their run for the White House and what he thought was important about the presidential debates between Clinton and Republican nominee Donald Trump.

Kaine praised Clinton’s performance at the debates, saying Clinton had three very solid performances and that she won all three debates.

“First, on the debates, three very solid performances and Hillary won all three of them,” he asserted. “I mean, it was very, very clear. And Hillary won them clearly because she has the preparation, she has the skill and the experience. There were not questions that she was asked where she couldn’t grapple with the topic, and she could talk about it big picture but she could also talk about the details, and those are important because if it’s about your life, it’s not a detail. It’s a big deal. She was able to do that.”

“But the thing where she really stood out was just the demeanor and the poise and the grace under pressure,” the Virginia Senator continued. “Donald came in trying to rattle her and do kind of nutty things each time, but she just showed a grace under pressure. And if there’s one thing you would want in a president of the United States, it’s that. She showed us judgment. She showed us temperament. She showed us compassion. Hillary, basically over the course of the debates, was sharing the theme, the ‘Stronger Together’ theme. As a nation, we are stronger together.”

Kaine used examples from his life, Clinton’s life, and American history to argue that the Democratic nominees support and represent the true identity of America.

“And so whether it was as a civil rights lawyer or First Lady of Arkansas or First Lady of the nation, U.S. senator, Secretary of State, that’s been the driver for Hillary,” he stated. “In fact, Chris Wallace asked right at the end of the debate, the last debate, ‘Well, just take a minute and just make your closing argument.’ And Hillary said, ‘For 40 years I have been working to advance the issues of families and children.’ She just – bang. This is who I am and this is what I do, and we’ve never had a president who has spent their entire career doing this. This is why Hillary does it.”

“I do what I do because I grew up in a pretty religious household, a Catholic household,” the Democratic VP nominee went on. “I was educated by Jesuits who put a big thumbprint on me to be focused on social justice. And in the middle of my time in law school, I was a missionary with great heroes in Honduras, and then came back to be a civil rights lawyer in Richmond. And again, it was about trying to make a difference in somebody’s life. This is why we’re doing this. We care deeply about policy. In fact, we’re kind of maybe sometimes too wonky about policy, but it’s all about trying to make a difference in somebody’s life.”

Kaine cited American history to show the crowd that although there have been many injustices in the nation’s past, the U.S. was founded on principles of liberty and equality for everyone. Kaine suggested that Trump’s comments against undocumented immigrants, women, the mentally ill and many others proves that he does not respect these principles and the American traditions of democracy.

As he wrapped up the event, Kaine mentioned his respect for Clinton’s determination and how that quality will help them win the race for the White House. He said that the type of people he and Clinton are will make them great leaders of the nation.

Not everyone was excited for Kaine’s visit. During the event, protesters held an anti-Clinton rally, holding signs saying “Hillary for Prison” and urging passersby to acknowledge Clinton’s corrupt campaign.

“I’m protesting because Hillary Clinton is waging an entirely corrupt campaign,” said Kyle Dulski, one of the protesters. “Just in the past couple weeks, the Project Veritas videos and the Wikileaks have shown just how low the Democratic party will go in order to win this election. Its disgusting.”

The protesters were part of Penn State’s Bull Moose party. Dulski said that they are unofficially Penn State’s chapter of Students for Trump, but Penn State officials told him due to copyright issues they could not call themselves that.