Kathleen Kane, the Democrat running for Attorney General, is on TV. Her first ad of the general election is a greatest hits collection from her effective commercials in the Democratic primary. 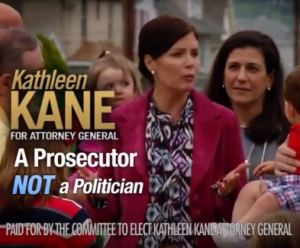 “You want somebody tough enough to tell the Harrisburg boys ‘enough is enough’?” asks Kane to the camera, a reminder that she is the first woman nominated for the office. “You need to send them a prosecutor, not a politician.”

An announcer continues, “Kane prosecuted violent predators. Child molesters. She took on a corrupt judge – and won. Now, she is running for Attorney General to stand up to the career politicians.”

It’s part of a statewide ad buy that began Monday and cost over $1 million. The language and footage from this ad is the same as her ads in the primary.

Kane served as an Assistant District Attorney in Lackawanna County for 12 years, until 2007. She defeated former Congressman Patrick Murphy in the primary, in part due to her strong television campaign.

But the message isn’t as strong a hit against her Republican opponent Dave Freed, a career prosecutor. Freed started in the York County District Attorney’s office out of law school, was a prosecutor in Cumberland County and has been the County’s District Attorney since 2006.

By way of contrast, Kane boasted in the primary that she had prosecuted over 3,000 cases – a number which includes everything from cases taken to trial, to cases where she looked plea bargains, all the way down to paperwork.

By the same measure, Freed has prosecuted over 20,000 cases.

“Kathleen Kane can repeat Jim Eisenhower’s failed 2000 campaign slogan every day of the week,” he said. “It doesn’t change the fact that she hasn’t worked as an assistant DA since 2007, nor does it erase her more than $46,000 in personal political contributions in the past 7 years. Maybe her slogan should be reversed.”

She also volunteered for Hillary Clinton’s presidential campaign in 2008.

Freed’s campaign is due to hit the airwaves Wednesday.