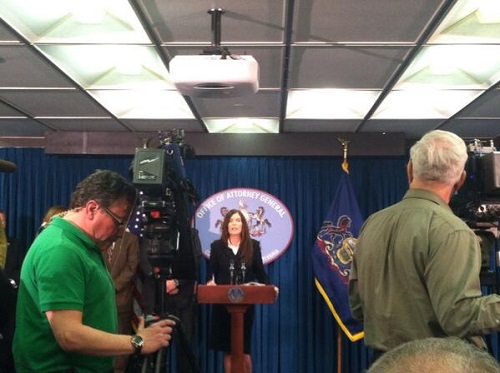 A new tangent materialized in the widely reported sting operation that Attorney General Kathleen Kane halted back in 2013.

Philadelphia District Attorney Seth Williams, an outspoken dissenter of Kane’s decision to stop the sting operation, accepted the AG’s offer to prosecute the case himself if he believed a conviction could be made.

Williams accepted the challenge more than two weeks ago, but none of the pertinent case files have been sent to Williams or his team.

In a letter to Williams, Kane cited “potential conflicts” that Williams will face handling the case, as well as “concerns about privacy provisions of the Pennsylvania Wiretap Act,” the Philadelphia Inquirer reports.

“It has been almost two weeks to the day that Ms. Kane requested that I take this case, and I find it odd that in all of this time she has never mentioned this so-called conflict of interest,” Williams told the Inquirer. “It is apparent that Ms. Kane doesn’t really believe I have a conflict, or she wouldn’t have repeatedly suggested I take over this case.”

Kane has received a lot of flack for her decision to disband the sting operation. She has insisted that the Attorney General’s office “could not prosecute [the] case,” citing a lack of prosecutable evidence and a blatantly racially-tinged operation. But even members of her own Democratic party have spoken out against her decision, Williams included.

The case involved five Philadelphia politicians, including four State Reps., who allegedly accepted bribes from an undercover lobbyist named Tyron B. Ali. The State Reps. implicated were all members of the Democratic Party as well as the Black Caucus.

Kane has faced accusations that she was protecting her own party and the lawmakers who supported her campaign. Williams, by accepting Kane’s offer to prosecute the case, hopes to correct any favoritism shown towards those implicated.

“The fact that political figures endorse a prosecutor for office should not grant them immunity from prosecution,” Williams told the Inquirer. “These same representatives endorsed Ms. Kane for office, but that did not excuse her from her duty to investigate and prosecute them under the law.”

As it stands, Williams is still waiting for the files to go any further with reassessing the case.

In addition, a reader poll held last month by PoliticsPA showed that many of this website’s viewers — a little more than half — believe that Kane should have prosecuted the case back in 2013.