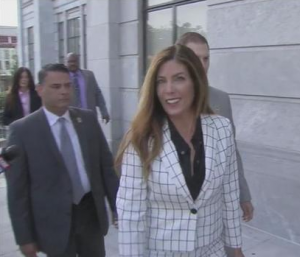 The Commonwealth’s top lawyer has been charged with perjury and obstruction all relating to an article that appeared in the Philadelphia Inquirer. In that article, grand jury information that was supposed to remain secret was leaked.

State prosecutors claim that it was Kane who leaked the information in order to get revenge on Frank Fina. Kane believed that Fina leaked information about her decision to shut down a sting operation that involved several Philly officials according to prosecutor Michelle Henry.

Detective Paul Bradbury was the first to take the stand. In his testimony, he went over various emails and texts including one email in particular where Kane wrote “This is war.” That email was written on the day the article about the sting operation came out.

Replying to that email, Kane’s media consultant J.J. Balaban sent a reply that she should “make war with Fina, but not with the Inquirer.”

Later on Bruce Beemer, a former aide to Kane, took the stand to explain what happened when he read the Inquirer article. He said that the article referenced a secret memo and that the leak, “had to have come out of our [the AG’s] office.”

“There would have only been a limited number of people who should have had access to a document like that,” he added.

In opening arguments before Beemer took the stand, Kane’s defense attorney argued that the Attorney General was a victim herself as she was fed lies and cover-ups from staffers.

Contrary to the prosecution’s claims Gerald Shargel, Kane’s counsel, said that she did not care “one whit about Frank Fina” and that Kane barely knew who Fina was.

While admitting that Kane made mistakes, such as saying she had not signed an oath of secrecy dealing with the grand jury testimony when she had, Shargel said they were “honest mistakes” and not part of anything malicious.

“Let me be clear: Attorney General Kathleen Kane did not leak any grand jury material,” Shargel asserted. “It just does not make sense that she would risk her reputation and her career.”

The trial will resume tomorrow morning.