Kelly Fires Back at Sharpton 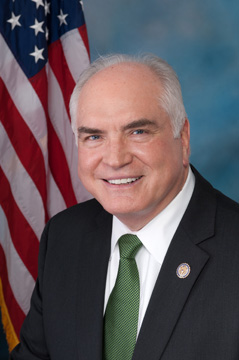 Rep. Mike Kelly (R-Butler) invoked the Bible and the American Dream in response to criticism by the Reverend Al Sharpton’s criticism of the Congressman’s investments in oil. He accused Sharpton of acting in a manner unbefitting for a man of the cloth and class-baiting. His complete op-ed is below.

During an MSNBC segment on Wednesday, Sharpton suggested that Kelly’s personal investment of $6 million in the energy industry created a conflict of interest with his voters regarding subsidies to oil companies. Sharpton went so far as to suggest that Kelly had acted unethically.

Kelly did not deny his oil connections and chose to respond to Rev. Sharpton’s criticism of his character and personal successes, proudly admitting that his wife’s family owns an oil company in Butler and have done quite well for themselves.

Kelly said that his family’s wealth is, “a testament to the blood, sweat, and tears that went into decades of hard work and sacrifice by God-fearing people who believed that if you worked hard and kept the faith, anything could happen.”

Thou Shall Not Bear False Witness, Reverend Sharpton

Preaching from the MSNBC pulpit, the Reverend Al Sharpton launched an unbefitting (for a man of the cloth) assault on my character that I am compelled to address.

During the program’s “Con Job of the Day” segment, the Reverend suggested that I would compromise the integrity of the office of the Third District of Pennsylvania by supporting policies that would benefit me personally, a claim that is both untrue and outright slanderous.

I had investments in an oil and natural gas company that was founded over 100 years ago by my wife’s family. Their success is a testament to the blood, sweat, and tears that went into decades of hard work and sacrifice by God-fearing people who believed that if you worked hard and kept the faith, anything could happen. Well something did happen; they realized the American dream. That is not a bad thing. In fact, it’s why people from all over the world, people who otherwise would never have a chance at success, come to our country in the hope of a better tomorrow.

When that dream becomes perverted by those who resent the success of others, we begin down a very slippery, and fundamentally un-American, slope.

What starts to happen is that instead of encouraging people to take risks in pursuit of a better way of life, people are coddled, coaxed, and eventually conned into complacency. The narrative is no longer about the American dream; the narrative becomes an “us” versus “them” scenario that divides the masses, pitting one group against another in an effort to conquer them both. Self-reliance is replaced by government over-reliance; individualism by collectivism; innovation by stagnation; and competition by defeatism. Effectively, the American spirit becomes crushed under the weight of a force so powerful, that even our Founding Fathers felt the need to warn us against it 235 years ago.

In the Declaration of Independence, the signers wrote that governments are instituted among men to secure certain unalienable rights, among them the rights to life, liberty and the pursuit of happiness, all of which are endowed to man by their Creator. As I write today, the right to life has been denied to tens of millions of innocent lives lost to abortion; liberty is being threatened by a level of federal expansionism that belies the limited government model on which our nation was founded; and the pursuit of happiness has been reduced to a “what’s in it for me” mentality that flies in the face of our nation’s longstanding legacy of service so beautifully epitomized in President Kennedy’s inaugural “ask not what your country can do for you, ask what you can do for your country” call to action.

We are at a critical time in our nation’s history. We have a staggering unemployment rate of 9.2 percent, our $14 trillion national debt is crippling our economy, and confidence, among consumers and in our markets, is dangerously low.

The last thing our great nation needs right now is division. We are one nation under God and we are indivisible, despite the efforts of those who seek to divide. I have confidence that the American people, fully united, will prevail in the face of our current challenges as we have done so many times in the past.  America and her people are, after all, truly exceptional.

Reverend Sharpton, I am not interested in using my position to advance my financial holdings. That claim is false. My interests are in advancing and defending the cause of freedom, getting our nation’s fiscal house in order, fixing our country for future generations, and serving the people of Northwestern Pennsylvania faithfully and honorably.

My love of God and country are real and my motivations are pure. Although I only answer to God, my family and the people I represent, I felt the need to respond to you since you and I are both men of faith.

As you continue your work in political punditry, keep in mind the commitment to truth to which we are all called, and remember that, as it is written in the Book of Proverbs: Truthful lips endure forever, but a lying tongue lasts only a moment; or in MSNBC time, one minute and 42 seconds.

Responses can be emailed to Kelly’s office at CommentsForMikeKelly@mail.house.gov.