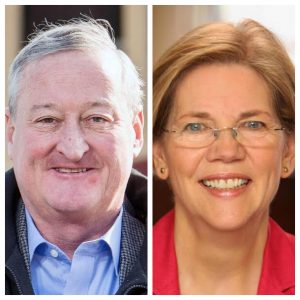 “Our nation is in crisis, we need strong and steady leadership in the White House,” Kenney said in an announcement video. “We need a new President with a big vision and bold ideas to put power in the hands of working Americans, not the 1% at the top. We need a new President who will bring us together and build an America that works for everyone.”

“I’m endorsing Elizabeth Warren for president because she will bring us together and put power in the hands of working families,” Kenney said.

This is Warren’s highest-profile endorsement to-date in the state of Pennsylvania. Most Democratic elected officials in the state to endorse so far support former Vice President Joe Biden, including Philadelphia Congressmen Brendan Boyle and Dwight Evans.

The Warren campaign welcomed the endorsement from Kenney in a statement lauding the Philly Mayor as a “champion of working families.”

Although Warren has been gaining momentum in the state and nationwide, some of the most pointed criticism from a fellow Democrat has come from a former Philly Mayor and Pennsylvania Governor. Ed Rendell penned an op-ed in the Washington Post accusing Warren of being a “hypocrite” of campaign fundraising in September.

The former Vice President and Scranton native has remained at the top of various Pennsylvania Democratic primary polls, while Warren is in second place. The Real Clear Politics average shows Biden leading with 22.5%, followed by Warren at 15%, then Sanders polling at 9%, and Buttigieg in fourth place with 7%.

I am endorsing Elizabeth Warren for President because she is a tough and determined leader. She has what it takes to defeat Donald Trump and lead us in the post-Trump era. She will unite us and put power in the hands of working families – & get our nation back on the right track. pic.twitter.com/8dLMOwLwor