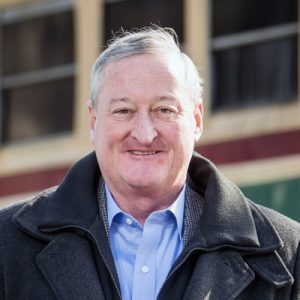 The mayor of Pennsylvania’s largest city is aiming to assist progressive Democrats throughout the Keystone State with the launch of a new political action committee.

First reported by the Philadelphia Inquirer on June 23, Philadelphia Mayor Jim Kenney has launched the “Kenney PAC” in an effort to boost progressive candidates in the upcoming legislative races in Pennsylvania, further fanning the flames on a possible 2022 gubernatorial bid.

“I’ve formed a new political action committee called Kenney PAC – which will help progressive candidates in the upcoming legislative races in Pennsylvania defeat extremist pro-Trump Republicans who are inspired and driven by the hatred and division emanating from the current occupant of the White House,” Kenney wrote in an email to supporters. “We in the progressive movement must galvanize our resources and focus on the enemies of equity and progress — and defeat them at the polls in the upcoming November election.”

Kenney described the goal of the PAC is to elect “like-minded progressive candidates” throughout the state and said he will continue to reach out about how they must “confront the forces of Donald Trump” in the upcoming election, coupled with enacting a “Peoples-First” reform agenda.

“Please donate to my new PAC now so that we can protect Philadelphia and communities like ours throughout Pennsylvania that are being held captive by right-wing extremists hell-bent on maintaining the status quo and their opposition to common-sense legislation and policies that benefit poor and working families throughout the state,” Kenney wrote to supporters in the email, linking to the PAC’s donation page.

Some of the specific priorities that Kenney laid out in the email included – equal access to jobs and economic opportunity for our black and brown communities; pre-K for all children combined with quality K-12 education and affordable, if not free post-secondary education for students who cannot afford to go to college; safe, affordable housing for all families; universal health-care; police department reform; and gun control.

The Philadelphia Inquirer first reported in late October 2019 about Kenney’s interest in a possible run for Governor in 2022.

Marty O’Rourke, Kenney’s campaign spokesperson, told the Inquirer that the Mayor is “focused on addressing critical issues confronting the city, while also helping to bring about necessary long-term change in Harrisburg,” when asked if he’s mulling a run for governor.