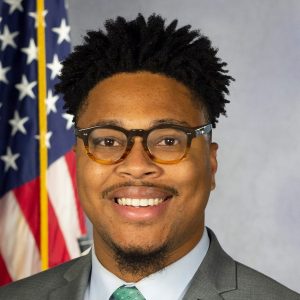 A Philadelphia Democrat has joined the 2022 race for U.S. Senate.

State Rep. Malcolm Kenyatta (D-Philadelphia) announced his candidacy for the 2022 U.S. Senate race on The ReidOut with Joy Reid on MSNBC on Thursday night.

“America succeeds because every generation steps up to protect, expand the promise of America,” Kenyatta said. “The promise that has excluded, for too long, so many working families whose lives were tough prior to COVID and this deadly pandemic has made those cracks even worse.”

“So, I know we have an opportunity right now to expand that promise. To make sure we have a country that just doesn’t talk about justice and fairness for all, but actually makes it real,” Kenyatta continued. “And it’s with faith in that mission and joy in my heart that I’m announcing here tonight that I’ll be a candidate for the United States Senate to represent the great commonwealth of Pennsylvania.”

He also posted an announcement video on social media shortly after his appearance on MSNBC, where he makes the case that he’s “running to be a voice for working families.”

It’s official: I am a Democrat running to be a voice for working families in the US Senate. Help us build this movement from the ground up: https://t.co/S4UAhtPfkU pic.twitter.com/8amZkdaKac

Kenyatta, 30, is currently serving his second term in the state House. He secured the Democratic Party nomination for the open seat in the 181st House District in North Philadelphia in 2018 in a five candidate primary, then coasted to win the seat over Republican candidate Milton Street. Kenyatta became the first Black LGTBQ person elected to the Pennsylvania legislature.

Kenyatta, a progressive Democrat, was an early, vocal supporter of Joe Biden’s 2020 presidential bid. He joined the Biden campaign on the trail in multiple states during the primary and was featured in a campaign video as well. During the 2020 Democratic National Convention, Kenyatta was one of three Pennsylvania Democrats featured in the “rising stars” Keynote address.

The GOP field is expected to be packed as well.