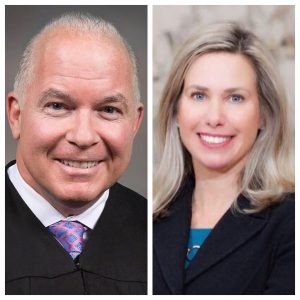 After 96% of unofficial returns counted, it appears that one new Democrat and one new Republican will be heading to the state Superior Court.

As of 3 am, Philadelphia Court of Common Pleas Judge Dan McCaffery, a Democrat, led the group with 25.72% of the vote, while Chester County prosecutor Megan King, a Republican, garnered 25.55%, according to unofficial numbers from the Department of State. Trailing McCaffery and King for the two open seats are lawyer and former Allegheny County Councilwoman Amanda Green-Hawkins, a Democrat, with 24.94% of the vote and Cumberland County Court Judge Christylee Peck, a Republican, with 23.79%.

The two vacancies on the state Superior Court were created by one Democrat and one Republican.

All four candidates who were on the ballot Tuesday were endorsed by their respective state party’s. During the May primary, Green-Hawkins was the highest vote getter, while King secured the most amount of votes in the GOP primary.

One term on the state Superior Court is 10 years.