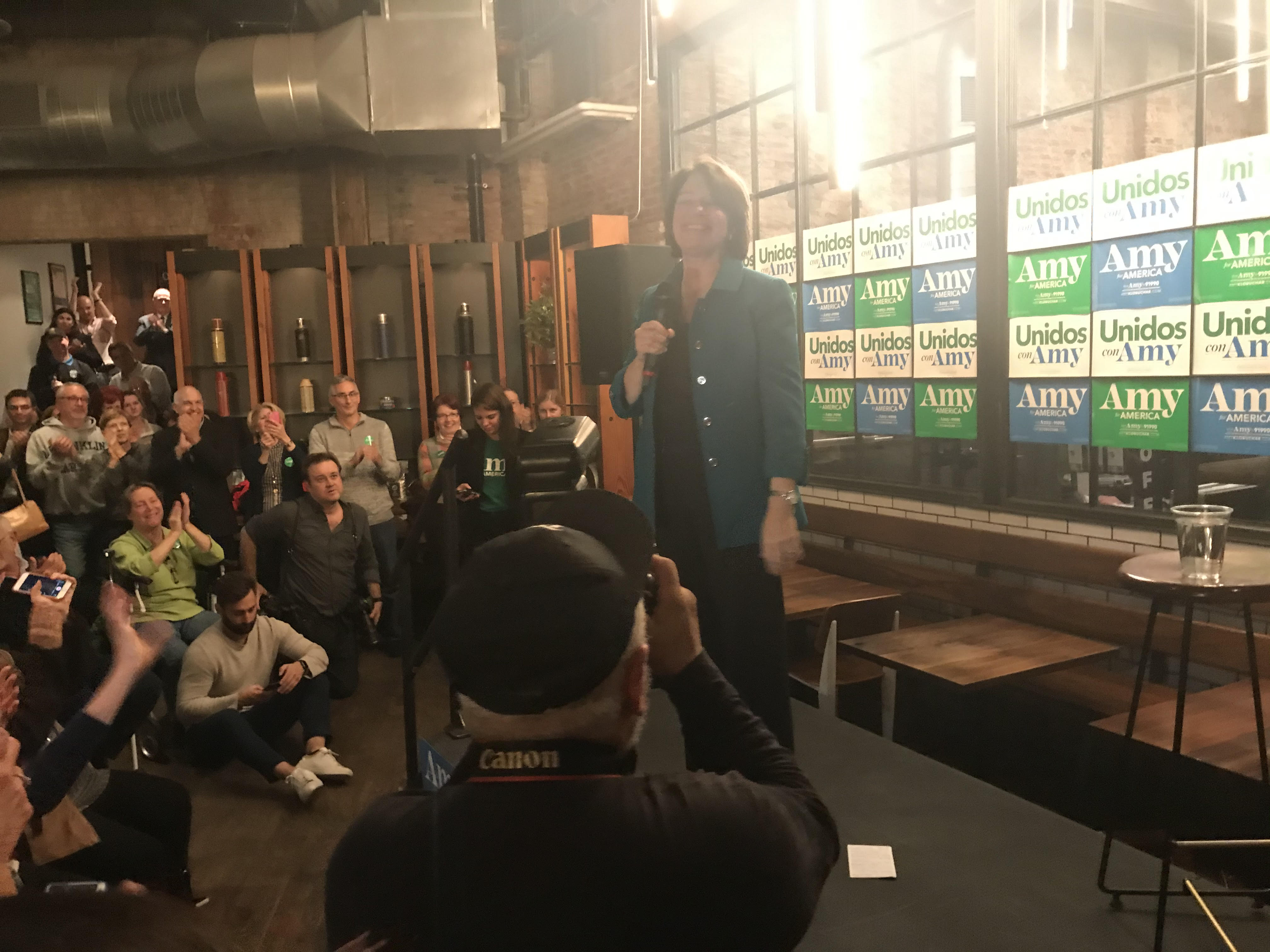 PHILADELPHIA- On the night before Election Day 2019, Sen. Amy Klobuchar (D-MN) returned to Philadelphia to make her case as the presidential candidate who can win back “blue wall” states from President Donald Trump and provide a vision to appeal to all voters.

“In 2020, if you honor me to lead this ticket, we are going to build a blue wall around those states and make Donald Trump pay for it,” Klobuchar said of key battleground states, which include Pennsylvania.

The 30 minute address to around 500 people at La Colombe in Fishtown, according to a campaign spokesperson, is the second campaign related public event that the Minnesota Senator has held in the state during her campaign. Klobuchar kicked off her “Blue Wall” tour in the state in September by speaking at the Pennsylvania Democratic Party headquarters in Philadelphia and later meeting with carpenters and holding a meet-and-greet with supporters in Pittsburgh. Her previous “Blue Wall” tour also included stops in Michigan and Wisconsin, which both previously voted for President Barack Obama twice then flipped to Trump in 2016.

Klobuchar touted her record winning over both Democratic and some GOP friendly areas in Minnesota during her Senate bids and likened her home state to Pennsylvania. Speaking to a gaggle of reporters after her speech, she said that although Pennsylvania’s primary isn’t until later in the cycle, she plans on continuing to make her pitch to voters in the state as a priority.

“I’m going to keep coming back here in a big way,” Klobuchar said. “For one thing, lets just say there are parts of it that remind me very much of Minnesota in your state.”

During her address, she didn’t single out one Democratic opponent, but instead laid out a series of policy positions she plans on addressing if elected and said that President Donald Trump needed to be voted out of office to “bring decency to government,” again.

Although Klobuchar has positioned herself as one of the more moderate Democrats in the race, she said that their party needs a “big, bold vision” for the nation and said she would be able to deliver that. The causes that Klobuchar highlighted on Monday night included climate change, strengthening the Affordable Care Act, immigration reform, student loans, gun control, and infrastructure spending.

Despite Trump’s holding a nearly 90% approval rating within the Republican Party, Klobuchar painted a picture of Republicans wanting to work with Democrats on some issues, specifically citing immigration, but were afraid to stand up to Trump.

Klobuchar dubbed herself as an “expert on knowing where Republican support is,” due to her record in the Senate leading legislation with bipartisan support.

While Klobuchar has touted her record as someone who can win over all voters, the Republican National Committee has previously criticized her as not the “Midwestern moderate” that she claims to be and touted Trump’s economic record as a reason the state will vote for him again in 2020.

“Amy Klobuchar once had a carefully crafted façade as a Midwestern moderate, but her agenda would rob hard-working Pennsylvanians out of money in their paychecks and jobs across the state,” said RNC Spokesperson Christiana Purves, after her “Blue Wall” tour. “President Trump has continued to fight for higher wages and job growth, and Pennsylvanians aren’t looking to end the ongoing success.”

When asked about her thoughts on this polling speaking to reporters after her speech, she once again emphasized the importance of electing a candidate that “can win,” and believes the poll indicates that many Democrats aren’t set on who to select yet.

She added that after momentum from her recent debate performance, she would like to be included in those hypothetical head to head matchups with Trump, touting a recent poll of her beating him by the largest margin in her home state of Minnesota, which narrowly voted for Clinton in 2016.

“Voters are looking for someone who can win,” Klobuchar said.

Despite touting strong numbers in her home state and Michigan, Klobuchar finds herself in 7th place in the most recent Real Clear Politics national average in the crowded Democratic presidential primary. The most recent Franklin & Marshall College poll of Pennsylvania Democratic primary voters shows Biden with a steady lead over the field, while Klobuchar tied with Sen. Michael Bennet (D-CO) for 5th place with 2% of the vote.

Klobuchar pointed to fundraising numbers after the most recent debate and polling in Iowa as proof that her campaign is picking up momentum. 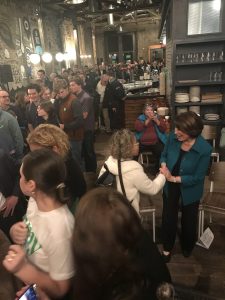 In addition to pushing the 2020 election, she also stressed the importance of getting out the vote in the 2019 election and supporting Democrats. She specifically called on voters in Chester and Delaware County to support Democrats in those “big, big” races.

Biden leads the way with support in the state in the form of endorsements from Sen. Bob Casey and various Congressmen, while Warren recently received the endorsement of Philadelphia Mayor Jim Kenney and Philadelphia District Attorney Larry Krasner.

While Klobuchar lauded the Democratic gains in the state in 2018, she said it was important to continue to appeal to voters in all races in the state, which she views as key to maintaining a majority in the U.S. House and winning back the Senate.

“We better win Pennsylvania big time,” Klobuchar said. “If you can’t win in a state like Pennsylvania, how are you ever going to win back the U.S. Senate and keep the House strong?”

“You’ve got to be able to win in these states,” Klobuchar said.