Large Field Lines Up To Replace Marino in Williamsport 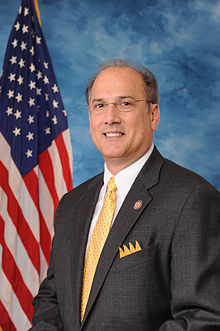 When a congressional seat opens up for one of the most Trump friendly districts in the state of Pennsylvania, it isn’t a surprise that a multitude of Republicans are throwing their hat in the ring to be their party’s nominee.

Tomorrow in Williamsport, only one out of the 20 plus confirmed candidates by the Pennsylvania Republican Party seeking the office will be awarded the nomination to represent the GOP in the special election set to take place on May 21.

In January, Rep. Tom Marino (R-Lycoming) announced he was resigning from Congress to take a job in the private sector, but told the Daily Item early in February that health issues prompted his resignation. Marino had just been re-elected to a fifth term in Congress in November after besting Democrat Marc Friedenberg, who will represent the Democrats once again in this special election.

The conferee meeting starting on Saturday morning will include a total of 202 delegates from the 15 different counties included in the 12th District. Lycoming County, where the meeting is being held, holds by far the largest number of conferees, 36. The number of delegates per county is tied in with the number of votes Donald Trump received in the 2016 presidential election. 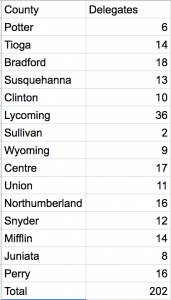 The slate of potential candidates includes a pair of state representatives, a GOP county chair, a county commissioner and more.

The nominee will need to collect 102 votes, a majority plus one, to walk away victorious.

Trump carried these boundaries by over 35 points in 2016, while Marino walked away with a 32 point victory in his most recent re-election bid.