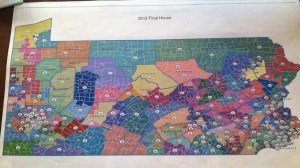 The three allege that using the district lines from the 2000 census is in violation of the one person, one vote doctrine of the Fourteenth Amendment’s equal protection clause. They have requested a special election to remedy the unconstitutional effects of the upcoming 2012 elections.

They claim the 2001 lines do not reflect Latino population growth within Philadelphia, Berks and Lehigh counties.

They further demanded that the special election be held after the November 2012 general election, with voting districts based on 2010 census numbers, instead of 2001.

Latino Justice believes this violates of the Constitution of the United States, The Pennsylvania State Constitution and the Voting Rights act of 1965.

“Latino voters, and indeed all voters in Pennsylvania, are being placed in a situation where they are forced to accept unconstitutional representation until 2014. Such results cannot be tolerated – hence our recent motion.”

According to Latino Justice, applying 2001 district lines in 2012 results in a 29.4 percent total population deviation within the State Senate and 42.8 percent for the State House, well in excess of the 10 percent required to establish a prima facie violation of the One Person, One Vote doctrine of the Fourteenth Amendment.

About 5.7 percent of PA’s population is Hispanic or Latino, according to the 2010 census. The National average is 16.7 percent.

In April, the  Legislative Reapportionment Commission passed preliminary versions of the Pa. House and Senate maps, but when the Supreme Court overturned the initial maps, they took action.

They previously asked the Court to stop the 2012 election using the 2001 district boundaries; it was denied because it would disrupt the political calendar for the April primaries.

The Legislative Reapportionment Commission passed new versions of the Pa. House and Senate maps in June, too late to be implemented for this cycle’s elections.

Currently,  there is no 2011 legislative redistricting plan that has the full force and effect of law.