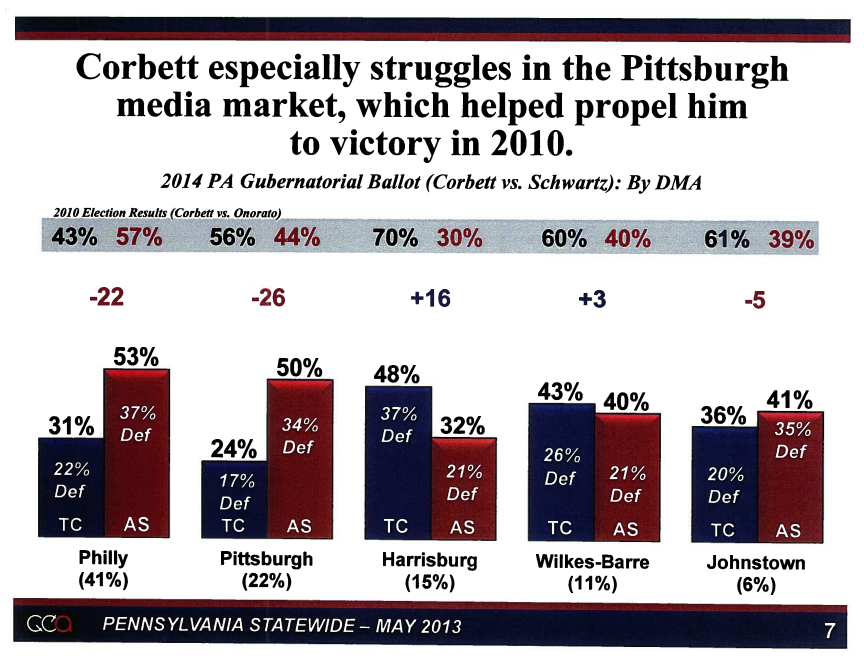 An internal poll conducted by a Republican firm and first reported by the Philadelphia City Paper shows Tom Corbett in a deep hole.

It’s not yet clear who leaked the poll to the CP.

53% to 40%, voters disapprove the way Corbett is handling his job as Governor.

And he loses in a hypothetical matchup with Congresswoman Allyson Schwartz by 12 points, 46% to 34%.

The pollster also broke down the state by media market, and found the Governor lagging in Pittsburgh. The complete regional breakdown is in the image above.

The pollster surveyed 600 registered voters from April 30 to May 2 via live interviews on landlines and cell phones. POS also oversampled the four southeast Pa. suburban counties. The margin of error is plus or minus 4%.

The full memo is here.

Its findings reiterate those by independent pollsters that the Governor’s re-election odds are long.

Luckily for Corbett, this isn’t a nightmare scenario where one of his inner circle leaked a poll conducted by his campaign. In fact, it appears the survey was commissioned by an outside group with the specific intent of influencing the Governor’s policy.

Most of the poll focuses not on Corbett’s statewide appeal, but on the Philadelphia School District, its current funding gap, and its teachers’ union.

A few hours after it published the poll, the City Paper determined that it was commissioned by an education reform group. PennCAN supports the specific policy outcomes recommended in the polling memo, as well as other conservative reforms including school vouchers.

The polling memo’s key argument: Corbett can boost his appeal in Philly, southeast Pa. and statewide by aggressively using the current crises to challenge the Philadelphia Federation of Teachers.

“With Governor Corbett’s weak job approval, re-elect and ballot support numbers, the current Philadelphia schools crisis presents an opportunity for the Governor to wedge the electorate on an issue that is favorable to him,” the memo concludes.

“Staging this battle presents Corbett with an opportunity to coalesce his base, focus on a key emerging issue in the state, and campaign against an ‘enemy’ that’s going to aggressively oppose him in ‘14 in any case.”

With this survey as with any internal poll the results should be taken with a grain of salt. Public Opinion Strategies is a reputable Republican polling firm, but at the end of the day the organization that pays for a poll gets the final say on its composition (the wording of questions, the emphasis of the polling memo, etc).

This polling memo was meant to convince Corbett that following PennCAN’s policy proposals would boost his odds of re-election.

But it’s not clear that the memo made it to Corbett’s desk, nor that its results have influenced his policies. Shortly after the CP story broke, Corbett’s office issued a statement clarifying his position on the Philadelphia schools funding crisis.

“As governor, I am committed to finding a long-term solution for the Philadelphia School District that is focused on students and is fiscally responsible for taxpayers,” Corbett said in the statement. “These solutions include a combination of student – centered contributions from the state, the city, the school district and the union – with an expectation that we will not be back at the drawing board again next year with another fiscal crisis.”

Coincidentally or not, his solution is the one the poll found to have the greatest statewide support.

The Philadelphia school district, in order to eliminate a $304 million deficit, has asked for aid from multiple levels of government, including $120 million from the state.