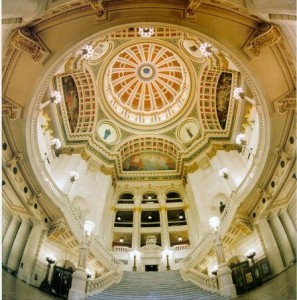 “As a member of the Legislative Reapportionment Commission, my staff and I are ready to roll up our sleeves and immediately begin working together to address any concerns the Pennsylvania Supreme Court may have.

“It should not be anyone’s goal for this year’s elections to be held in the 2001 lines which clearly disenfranchise voters throughout the state and do not proportionately represent the population shifts.

“The commission, however, needs clarity and certainty from the court in an expeditious manner to modify the plan as may be necessary.

“Simply, we need the court’s opinion immediately in order to accomplish our task.

“We need clear and timely guidance from the Supreme Court so we can move forward. The commission can meet as early as next week in order to avoid what could be a problem of constitutional proportions.

“We are anxiously awaiting the opinion of the Supreme Court so we can understand its concerns and respond accordingly.”

Update: Republican Party of Pennsylvania Executive Director Mike Barley is out with a scathing statement about Justice Baer:

“While the rest of Pennsylvania anxiously awaits the Court’s opinion on redistricting, Justice Baer decided to provide his own commentary on the matter, violating both Judicial Canon and the Pennsylvania Constitution in the process.  The fact that a Pennsylvania Supreme Court Judge would make politically-motivated comments to the press on a pending court proceeding is absolutely outrageous, especially since the court’s official opinion on the matter has not yet been released.  Justice Baer’s comments are more than just an abdication of his judicial responsibilities; they are in direct contravention of both the Pennsylvania Code of Judicial Conduct and the Pennsylvania Constitution. Justice Bear should be reprimanded for his poor judgment and recuse himself from any judicial activity related to this matter.”

Update: Capitolwire reports Justice Baer said the court order should come out next week. It his belief that the 2012 election will be run on the 2001 lines and not new lines.

“I think it’s outrageous that instead of issuing an opinion, to provide guidance to over 12 million Pennsylvanians as to who their representatives and state senators will be in the 2012 election cycle, we are reading press comments from a single Supreme Court justice in a resort in Puerto Rico.

“I look forward to reading the court’s opinions and working with the commission to respond in time for the 2012 election cycle. On a matter as important as drawing legislative districts, I think the court should explain itself in formal opinions rather than in conversations with newspaper reporters.”

“I don’t think the commission could sit down, re-look at this after we give them guidance, and do it in a week or so,” he said. “If they can do it in time to have the elections on these lines this year, that is fine, we are open to that. But I don’t see how they can do that.”

In addition to whatever turn-around time the commission would have, the courts would have to then allow time for appeals to be filed, then hear the appeals, Baer said.

“The chief justice’s order was to provide the information to the political establishment that these elections are likely to go on the 2001 lines. We are going to do this quickly, but we felt it was not likely it could be quick enough, and we wanted people to know what the rules were, so they would know what they are filing for. But we have no agenda about whether it gets done and which lines will be in place. But while it goes forward, until we have a new plan that the court approves, we wanted people to know what the lines were, what the rules were.

Harrisburg is still in a holding pattern following the decision from the Pa. Supreme Court last night. In Republicans circles, there are rumors that the 2001 lines will be in effect for this cycle and new lines will not go into effect until the elections that take place in 2014. Officials say that is nothing short of speculation.

Depending on the extent of the guidelines from the state Supreme Court and the timing that those guidelines come down, there could potentially be an opportunity for the Legislative Reapportionment Commission to meet, draw new lines and go through the appeals process once again.

From what we understand the extent to which the 2012 lines can be saved is wholly dependent on how much revision the court asks the LRC to undertake. With each passing day, the chances that substantial changes can be made while protecting the calendar diminish. As has been previously reported, three of the state Supreme Court justices are scheduled to be in Puerto Rico for the rest of the week at the Pa. Bar midyear event.

Candidates are being told to look for further guidance from the court when it issues its opinion.  The court order states that as of now the 2001 districts are in effect.

Yesterday’s court order had no impact on statewide, Congressional, and convention delegate candidates so those looking to get on the ballot for those races are proceeding under the old calendar with new districts.