“Governor Corbett had a choice. He chose to cut a billion dollars from our schools, increasing classroom sizes and risking our kids’ futures. All to give tax breaks to his corporate friends,” says the narrator. 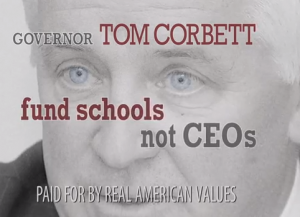 It’s a common line of attack by Democrats who criticize the Governor for not replacing $1B in education funding that came from expired federal stimulus funds. Corbett and Republicans note that state funding for education and teachers’ pensions has increased during his tenure.

The group is Real American Values, a 501c4 that formed on April 1. Its donors and spending aren’t subject to campaign disclosure rules, but a Department of State document shows it was incorporated by Bob Wolper of Strategic Communications Consultants.

The group is a, “non profit meant to educate the public on Tom Corbett’s record of putting corporations ahead of Pennsylvania children,” Wolper told PoliticsPA.

The ad is being aired in the Harrisburg television market this week to the tune of $32,000, according to a Republican media watcher.

Wolper declined to specify the size or duration of the ad buy as well the media markets where it will air beyond calling it “substantial.” He also declined to name the group’s donors.

Wolper is a public relations veteran with deep ties to the UFCW local 1776 labor union, which presently is heavily engaged in opposition to Corbett’s effort to privatize the state-owned liquor stores. Last year, the UFCW disbursed over $182,000 to Wolper’s firm for communications work.

He said the ad has nothing to do with privatization.

“I have done consulting for a number of unions,” and other organizations, Wolper said.