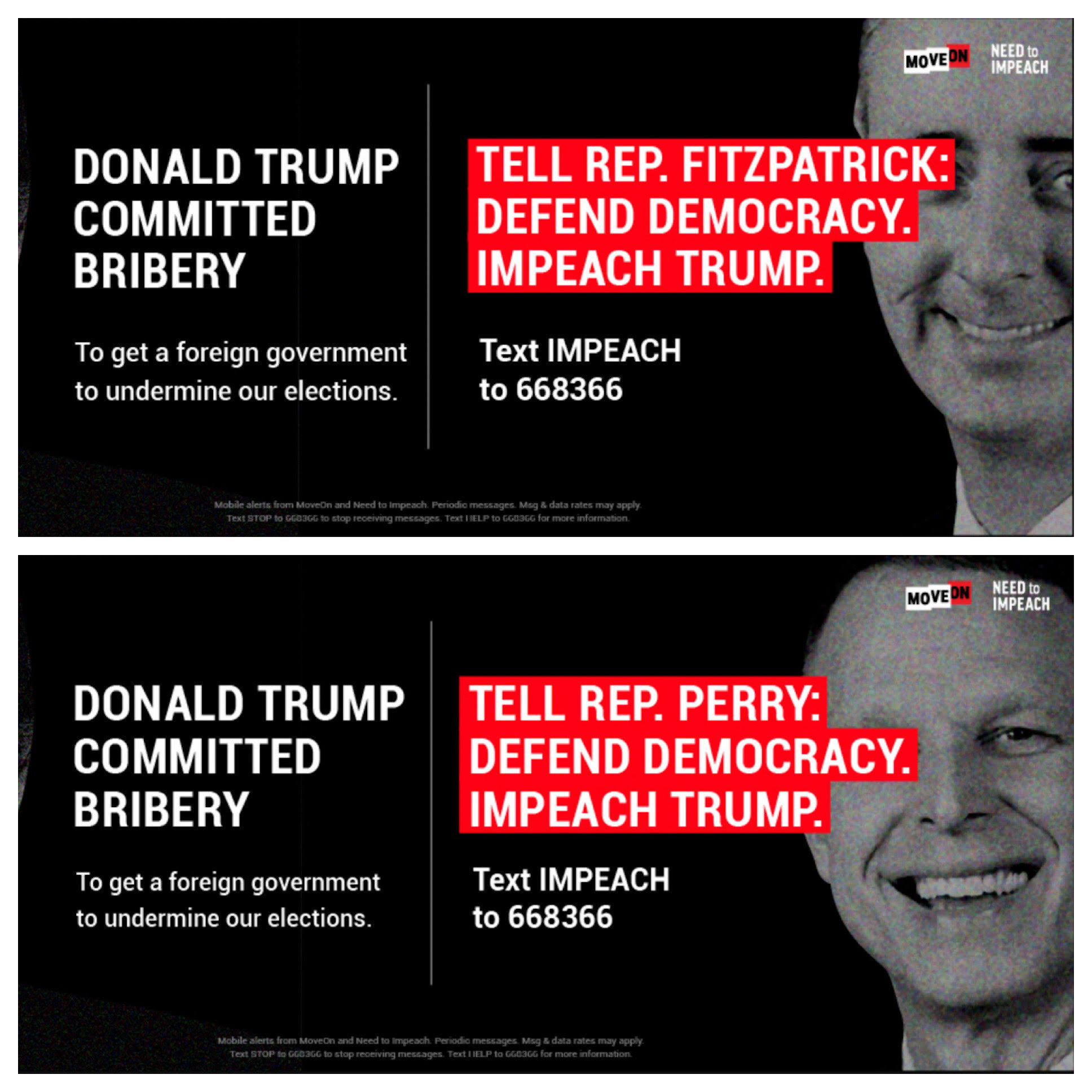 The impeachment campaign goes on the road.

Need to Impeach and Move On, two liberal groups, sent out mobile billboard trucks to the districts of eight House Republicans, includings Reps. Brian Fitzpatrick (R-Bucks) and Scott Perry (R-York), with a message urging them to “defend democracy” and “impeach Trump” after the second week of public hearings on impeachment.

“The billboards, which comes as Congress concludes its second week of public hearings on impeachment, demands that these members of Congress stop covering for Donald Trump’s abuses of power, in which he pressured a foreign government to interfere in a U.S. election to advance his own political interests, undermined state and local elections, interfered with national security, and got caught trying to cover it all up,” the release from the two groups said announcing the mobile truck ad campaign.

The press release from the groups said that the mobile billboard trucks would stop in Fitzpatrick’s district from Monday Nov. 25 to Thursday Nov. 28 making appearances at the Bucks County Republican Committee, one of Fitzpatrick’s District office, the Bucks County Courier Times and The Intelligencer, and the Neshaminy Mall. The mobile billboard trucks are set to be in Perry’s district from Wednesday Nov. 27 to Thursday Nov. 28 with appearances scheduled for his Dauphin County District Office, Market Square, and the Pennsylvania State Capitol Complex.

“It’s not surprising to see dark money groups like MoveOn pushing a losing message in Pennsylvania,” said Charlie O’Neill, PAGOP Executive Director. “The reality is Impeachment has been the Democrats plan since before President Trump was even sworn into office. The hearings have been a total disaster for the Democrats and public opinion is confirming this. We look forward to sending Congressmen Fitzpatrick and Perry back to Washington along with President Trump in 2020.”

Last Friday, Fitzpatrick told LevittownNow that he described the president’s actions with Ukraine aid as “troubling” but felt Trump’s actions should be investigated by law enforcement and that he hasn’t seen enough evidence yet to vote to impeach Trump.

While this effort has aimed at getting Fitzpatrick and Perry to support impeachment, American Action Network, a GOP connected group that describes itself as promoting “center-right policies based on the principles of freedom, limited government, American exceptionalism, and strong national security,” launched a digital ad campaign thanking both Fitzpatrick and Perry for “standing against impeachment.”

A spokesperson for American Action Network tells PoliticsPA that they are spending $100,000 for Fitzpatrick and $50,000 for Perry’s district.

Fitzpatrick’s district narrowly supported Clinton in 2016, while Perry’s district went to Trump by just under 10 points.

Perry edged out Democrat George Scott by 2.5 points in 2018, while he comfortably won his 2016 bid in the old GOP friendly 4th District.

Fitzpatrick, Perry, and Mike Kelly (R-Butler), have been targeted by the DCCC as seats to flip in 2020.