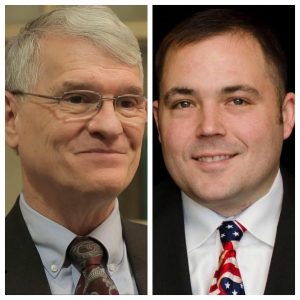 Room for one more?

Sen. Bob Casey’s and Gov. Tom Wolf’s reelection bids are well underway against challengers Lou Barletta and Scott Wagner. The two campaigns have traded jabs for the past several months and will only pick up as we get closer to November. Now a third candidate is ready to enter the fray in both races.

For Kerns, this is his first go-round for the U.S. Senate.

The minimum required signatures needed to get on the November ballot is 5,000 by August 1. Anyone who wants to challenge their signatures has until August 8.

Both Libertarian candidates filed more than twice the amount needed to get on the ballot.

Kerns’ stances on the issues include opposing tariffs, “which are just a tax on consumers”, passing a balanced budget, “no-compromise” on the 2nd amendment, auditing the Federal Reserve, fighting the opioid epidemic with a “Addiction is Not a Crime” bill, abolishing the Department of Education, bringing back “War Powers” to Congress, and abolishing property taxes.

Kerns, a construction worker, also pledged if elected he will sign the Americans for tax Reform Pledge and not vote for any tax increase, won’t take a pension, won’t take the healthcare, will not run for another term, and will implement a “citizens committee to advise on policies and oversee government”.

Krawchuk most recently ran in 2012 as the Libertarian candidate for State Representative in the 153rd District of Abington and Rockledge.

It is the first campaign cycle under ballot access measures adopted in February. Third-party candidates and independents this year are required to submit 5,000 signatures. Previously the required number changed every year: 2 percent of the top vote-getter in the previous election. The disparity has long been a source of frustration, and several individuals and parties sued the state in 2012. PA agreed to relax the threshold as part of a federal lawsuit settlement.

The number is still higher than is required for Democrats or Republicans.

Krawchuk stressed the need of electing a Libertarian to a statewide office while focusing on two specific themes.

“This is a great day for the taxpayers of Pennsylvania,” he said. “With the cost of government rising at an average of three times the rate of inflation for over 50 years, it’s long past time for a Libertarian Governor.  And with all the needless deaths that are happening across the state—whether from the opioid crisis, or at the hands of the police, or just regular people who fall through the safety net— compassion calls out for a Libertarian Governor.  Taken together, that’s why the theme of this campaign is Death and Taxes.  My goal as Governor is to reduce both dramatically.”