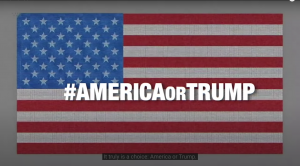 Now a group of never-Trump Republicans is hoping to sway those voters with a new ad campaign criticizing the president’s response on COVID-19.

The ad, “Memories,” begins by mentioning a series of events that would not be able to take place due to restrictions in place to combat the virus, followed by pinning the blame on Trump.

“COVID has robbed America of so much. None of this had to happen,” says the voiceover. “We have suffered needlessly because Trump is a fool, a liar, and a failure. Most countries stopped it.”

The Trump campaign described the ad as an attack from “the swamp,” and touted the president’s high approval rating within the Republican Party.

“This is the swamp – yet again – trying to take down the duly elected President of the United States,” said Trump campaign spokesperson Erin Perrine in a statement to PoliticsPA. “President Trump is the leader of a united Republican Party where he has earned 94% of Republican votes during the primaries – something any former president of any party could only dream of.”

A spokesperson from the Lincoln Project told PoliticsPA that that ad is a 7-10 day long targeted buy running on broadcast and cable in the Scranton / Wilkes-Barre market.

A number of groups opposing the president have run ads in Pennsylvania criticizing Trump’s response on COVID-19 for the past few months.

A Franklin & Marshall College poll of Pennsylvania likely voters in late July showed that Trump received poor grades on his job handling the outbreak. 29% said that Trump has done an “excellent” or “very good job” handling coronavirus outbreak, while 57% said that he deserves either a “failing” or “below average” grade on the matter, and 14% said that the president has been “average” on his response to COVID-19.

Trump’s best marks on the six specific topics asked to voters from the recent F&M poll was the economy with 45% that said Trump has done either an “excellent” or “very good” job helping to create new jobs, while 36% said that the president deserves either a “failing” or “below average” grade on the matter, and 17% said that the president has been “average” on the issue.