In an election year that’s all about the economy, Republican Jim Billman seeks to shift the focus toward gay marriage. In a limited cable television buy, he slams Democratic opponent Mark Rozzi for supporting gay marriage. 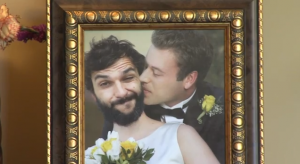 “For hundreds of years, most Pennsylvanians have agreed with traditional marriage. But, Mark Rozzi takes another approach,” says an announcer, citing this Reading Eagle report about their September debate.

“Jim Billman, as a husband and a father, knows that marriage is between a man and a woman. He’ll support that in the State House. Mark Rozzi’s view is,” the announcer says as the camera zooms in on the photograph above, “not quite what marriage is all about.”

The spot was produced by VideoWorks Production Company. PoliticsPA is seeking details about the buy. Based on Billman’s campaign finance reports, it’s probably a small purchase on Reading-area cable. It’s his second small ad buy – the first accused the City of Reading of charging him property tax evasion in order to keep him out of the race.

No other GOP candidate in Pa. has pursued this line of attack with television ads in 2012 – at least not that PoliticsPA is aware of.

Rozzi said he does support gay marriage, as well as funding for Planned Parenthood.

“Thank you for running an ad showing people what I support,” he said of the commercial. “That’s fine. He’s running ads like this because he has nothing else to run on.”

“I was born and raised Catholic, and the nuns and teachers told us to love everybody and welcome everybody to your group.”

Both men are vying to replace retiring Rep. Dante Santoni (D-Berks). The district comprises part of the City of Reading and its northern suburbs, and Democrats enjoy a 34 point voter registration advantage: 61 percent to 27 percent, according to Labels & Lists.

Rozzi runs his family’s window, door, and sunroom contracting business in Reading. He has the distinction of being the only Democrat in Pa. to be endorsed by PEG-PAC, the political arm of the Pa. Business Counsel.

Billman runs his own real estate business and is Chairman of the Berks County Patriots Tea Party organization.