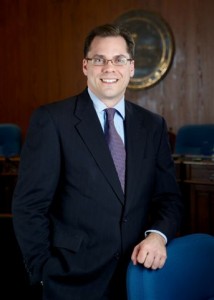 Harrisburg City Councilman Brad Koplinski picked up a few significant endorsements in the days leading up to the Democratic primary for lieutenant governor.

On Wednesday, Koplinski added State Senator Rob Teplitz’s (D-Dauphin) support to his campaign. Along with his endorsement, Teplitz said, “I’ve known and worked with Brad for a long time and can personally attest to his passion for public service and his willingness to fight the hard fights. I’m proud to support his campaign for Lt. Governor and look forward to working with him and the new administration next year.”

Koplinski responded in kind, stating that was proud to gain the Senator’s support and admires Teplitz’s commitment to his Democratic values. “We have many of the same goals,” Koplinski said, “including making sure our municipalities are better served by the Commonwealth.”

In addition, the International Brotherhood of Electrical Workers Local 56 in Erie threw their collective weight behind Koplinski for lieutenant governor. Local President Matt McLaughlin cited Koplinski’s dedication to labor issues and Pennsylvania as the reasons for the group’s support. In response, Koplinski said, “I am grateful to IBEW Local 56 for their endorsement. They work for the working people of Erie and the Northwest every day and I am proud to stand with them.”

Earlier this week, Koplinski also scored the endorsement of the LGBT activist group, the Capital Region Stonewall Democrats. The organization had sent out a questionnaire based on LGBT concerns for candidates to fill out and return to them. Candidates also had an opportunity to speak to the group on April 30.

“I am proud to have the endorsement of the Capital Region Stonewall Democrats,” Koplinski said. “They have been working for equality and other vital issues for ten years and I am excited to work with them towards their goals.”

Last but not least, Koplinski won the Upper Dublin Democrats Caucus, an Iowa-style caucus meeting that took place in Montgomery County over the weekend. Candidates would present their platform to a different section of the room and voters would verbally say which candidate they support. Candidates needed to gain at least 15 percent of support in the room or their name would not be considered during the final vote.

Of course, Koplinski responded happily to the endorsement, saying, “Montgomery County is a vital link to victory on May 20th. I worked a caucus meeting in Iowa in 1988 for Mike Dukakis, in which he received third place. I am very happy that this result came out much better and am grateful for the support.”

This string of endorsements is added to Koplinski’s growing and impressive list. He also has the support of the National Organization for Women, the Pennsylvania Young Democrats, and a vast number of different Democratic leaders from across the state.