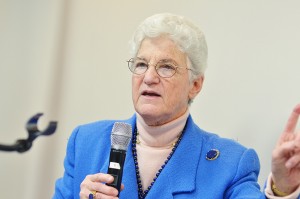 In case you haven’t noticed, Attorney General Kathleen Kane is in quite a bit of trouble right now.

While she has pledged to fight on, the possibility that Kane will step down or be removed has become very real since her arraignment.

If Kane is forced to leave office before the end of her term, Governor Tom Wolf will have to select a replacement.

There has been plenty of speculation on just who that official could be.

One person, however, is already pitching their candidacy to party leaders: Lynne Abraham.

Abraham served as Philadelphia’s District Attorney from 1991 to 2010. Earlier this year, she ran for Mayor of Philly but finished in third place.

According to a source with knowledge of the situation, Abraham believes she can be an effective placeholder until Jan. 2017. Several of the people she worked with in Philly are now in the AG’s office and she briefly considered a run back in 2012.

PoliticsPA has also learned that Abraham has secured the commitment of Congressman, and Philadelphia Democratic Party Chair, Bob Brady.

An Abraham appointment, though, would face a number of potential roadblocks.

First, her tenure as DA was quite controversial, particularly her strong support of the death penalty.

Second, Abraham is 74 years old and the last image many Pennsylvanians have of her is when she fainted during a TV debate last April. By all accounts she is still an indefatigable individual but that high-profile incident will be tough to shake.

Finally, any appointee would have to be approved by the GOP-controlled Senate and the Philly Democrat doesn’t have many connections to Harrisburg Republicans.

Nevertheless, there aren’t many contenders that are willing to only serve until a successor is chosen in 2016.