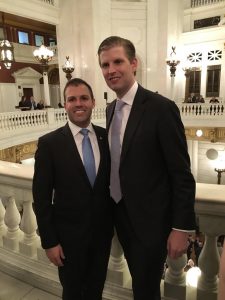 State Rep. Ryan Mackenzie’s (R-Lehigh) campaign for the 15th Congressional district is accusing state Rep. Justin Simmons (R-Lehigh) of being ‘never Trump’ throughout the 2016 campaign.  Mackenzie’s campaign is citing an event in the capitol rotunda on October 24th, 2016 with Eric Trump.

According to the campaign, Simmons was in the Capitol on the 24th based off legislative records.

“It is unbelievable that Justin Simmons was just steps away from where this press conference and rally took place and he choose to abandon our Republican candidate at this critical moment in one of nation’s most important elections,” Koutsiouroumbas said.

Mackenzie did not speak at the event, but was on the list of state House members who endorsed Trump and attended the event.

“I was proud to endorse Donald J. Trump for President and stand with his son, Eric Trump, and many of my State Representatives colleagues as we put Washington on notice that we were determined to fight to get our country back on the right track,” Mackenzie said.

In a district that voted for Trump by 8 points, but Congressman Charlie Dent (R-Lehigh) won by 20 points, two Republican candidates arguing over who is the more of a Trump supporter.  In a swing district like the 15th, that could create issues in a general election.

Update: Simmons responded to the accusations, saying that while he was not at the event, that does not mean he did not support Trump.

“The hand-picked candidate of Never-Trumper Charlie Dent and the political establishment, Ryan Mackenzie is so desperate that they are resorting to outright lies and unsupported facts. Just because I wasn’t at a rally that day doesn’t mean I didn’t support him. This is absurd and desperate,” Simmons said in an email to PoliticsPA.

Simmons also cited that he voted for Trump over Clinton, and that Mackenzie did not say who he would support as a delegate to the RNC.

“Meanwhile, establishment candidate and Never-Trumper Dent’s hand picked candidate, Ryan Mackenzie, refused to support Trump when he was running for delegate but lied to Bobby Gunter Walsh the day he announced that he was first to endorse Donald Trump,” Simmons said.

Mackenzie ran for as a delegate in 2016, but did not commit to a candidate, saying instead he would support whoever won his district.  That position was taken by many of the delegate hopefuls, especially elected officials, but if Mackenzie was a Trump delegate he would have said so.

Simmons then went on the offensive against Mackenzie’s release.

“I knew Ryan and his team of sleazy lobbyists posing as consultants would be dirty, but I didn’t expect outright lies. I guess that’s what happens when you are losing.”

The list of speakers and attendees (provided by the Mackenzie campaign) can be seen below.