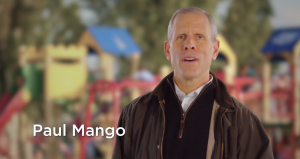 The ad is a bit of a shift from Mango’s last ad, which focused just on Wagner.  The new ad points to Mango’s time in the Army and his desire to keep schools safe.

“As the father of five daughters, I worry about school safety just like every other parent,” Mango said.

“There have been 70 school shootings in four years and yet, Senator Scott Wagner and Governor Tom Wolf have done nothing during their time in Harrisburg to address this problem and we are no closer to solving this crisis.”

The 30-second ad features Mango speaking directly to camera and will be running in tandem with Mango’s ad attacking Wagner.

Mango’s campaign says that he will improve mental health screenings, allow schools to create their own safety plan, prevent the mentally ill from owning guns, and improve the sharing of information between levels of government.

The ad is the latest in the back and forth between the Mango and Wagner campaigns as the May 15th primary is just over one month away.

Wagner’s campaign disputes Mango’s claim that he has done nothing to address school safety.

“Just days after Parkland, Scott announced what City and State called, –  “a multifaceted approach to ensuring school shootings in Pennsylvania would not occur should he become governor. Scott has has called for a special session on school safety and has repeatedly criticized Governor Wolf for saying that it is “a federal issue”. Paul Mango, on the other hand, has not put forward a detailed school safety plan, and just this week released an endorsement from someone who believes the only thing the government can do on school safety is have kids teach each other CPR and hope for the best,” Wagner’s campaign spokesman Andrew Romeo said.

The City & State article Romeo points to is outlines Wagner’s speech to the Pennsylvania Press Club in February.

Wagner’s campaign also asks if Mango :supports the death penalty for school shooters like Scott does.”

“Paul supports the death penalty, particularly for a heinous act of violence like the school shootings we have seen,” Mango’s campaign spokesman Matt Beynon said.