Map: The Growth of the Appalachia/Acela Divide in PA

Realignments are an often discussed topic in political science.

The biggest realignment in Pennsylvania, as I’ve noted before, is the growing east vs. west divide. Over the past few decades we’ve seen the formerly Democratic Southwest grow more and more Republican as the former GOP counties in the Southeast move to the Democrats.

A new map from the New York Times’ Nate Cohn perfectly illustrates this.

Cohn compiled the graphic after a question about the evolution of the country’s voting pattern between the 1988 and 2004 presidential elections. If you recall, the circumstances of both elections were similar, in that a George Bush ran against a Massachusetts Democrat who was portrayed as too liberal to defend the nation in a time of crisis (the end of the Cold War in ‘88, the War on Terror and Iraqi occupation in ‘04).

The following map shows the county-by-county shift in the popular vote from 1988 to 2004: 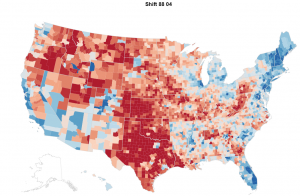 As you can see, the image captures a number of profound changes in the country’s political make-up, most prominently the growth of Republicans in the center of the nation. One can even glimpse the beginnings of future trends as well, like the Democratic growth in the Southwest.

The most striking aspect, though, is the almost perfect division of Pennsylvania into two halves. No other state closely resembles our geographical split.

This nationwide perspective also provides a phenomenal view of why I termed it an Appalachia/Acela split. The GOP growth in the west covers all of West Virginia, as well as the parts of Kentucky, Ohio and Virginia that correspond with the mountain range.

On the other side, the Philly “collar counties” are part of a blue streak stretching from New England through New York and New Jersey down all the way to Northern Virginia. In fact, of the twenty-seven counties where the Democrats gained 30 points from 1988 to 2004, three of them (Chester, Delaware and Montgomery) were in Southeast PA.

If Democrats hope to continue to keep their edge in statewide races, they’ll have to maintain majorities in those “Acela” counties.