Note: The following article and maps was written and created by Gregory Naigles. You can check out the rest of his work at his website here.

There are some states for which mapping their election results by county just doesn’t cut it, due to the fact that their election results vary widely inside the county. To tell the whole story, you’ve got to look at the municipality-level results, or even the precinct-level results. Pennsylvania is one of those states. The political diversity in Pennsylvania is so great that mapping the election results by municipality or precinct is really the only way to go. And that political diversity isn’t just shown in the Presidential election – it’s shown in the congressional and state legislative elections as well. I thus present some really cool maps of Pennsylvania’s 2012 Congressional and state legislative elections.

This first map shows the results of the 2012 Congressional elections in Pennsylvania by precinct (click on the maps for a full-size view). 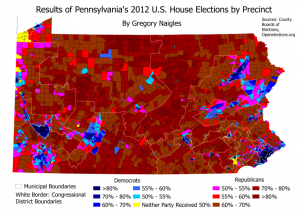 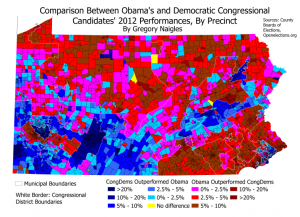 Some patterns in the results:

4. Bill Shuster’s unheralded Democratic challenger, Karen Ramsburg, actually outperformed Obama in most of that district. Thus, it’s clear that Obama’s terrible performance in SWPA in 2012 was unique to him.

8. All of the Republican incumbents in SEPA, Lancaster, York, and the Lehigh Valley dramatically outperformed Romney.

Here’s a map of the 2012 State Senate elections in Pennsylvania. Pennsylvania staggers its state senate elections so that half are up for re-election every presidential or midterm year, which is why half the map is colored white. 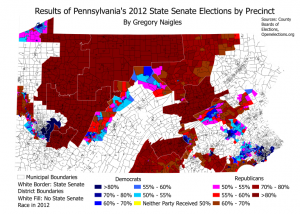 Several candidates on both sides were unopposed, which is why some districts are entirely dark blue or dark red.

Here’s a map comparing the state senate results mapped above to the 2012 presidential election results: 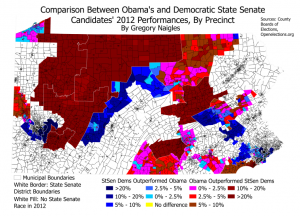 However, there are some exceptions. Republican incumbent Lloyd Smucker of Lancaster County, and Democratic incumbent Daylin Leach of SEPA, only barely outperformed the top of the ticket in their elections, largely because there are fewer voters in those areas who are willing to split their tickets. And Republican incumbent Dave Argall of Schuylkill County underperformed Romney in his re-election, largely due to the fact that his Democratic opponent, Tim Seip, was a former state representative for western Schuylkill County.

The three major open-seat races, all won by Democrats, were a mixed bag in terms of comparisons to the presidential race. In the Harrisburg district, Democrat Rob Teplitz slightly underperformed Obama on the way to a narrow 3-point win, while in Erie, Democrat Sean Wiley slightly outperformed Obama while earning a dominating 21-point win. Finally, in southern Allegheny County, Democrat Matt Smith dramatically outperformed Obama to pick up, by a 5-point margin, a Republican-leaning district that Romney won by 9 points.

On to the state House of Representatives! 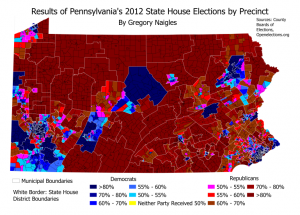 As you can see, there are many more unopposed incumbents here. Democrat Mike Hanna’s district definitely sticks out here – he represents Clinton and part of Centre. His district voted heavily for Romney, but he ran unopposed. 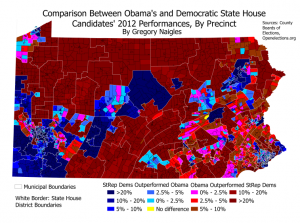 As this map shows, Democratic state house candidates outperformed Obama almost everywhere in SWPA, as well as in places like Armstrong and Clearfield that have turned solidly Republican at most other levels. Many other Democratic state house incumbents (including those in Lawrence County, Johnstown, Williamsport, Lower Makefield, and Norristown) and unsuccessful challengers (including those in Columbia County, Shippensburg, and Altoona) also outperformed Obama. However, a substantial number of Republican incumbents, particularly in SEPA, massively outperformed Romney. The most extreme example of this is Republican John Taylor, the only Republican incumbent in Philadelphia to survive 2012. His district voted for Obama by a 2-1 margin, and yet Taylor won re-election 57-43. Taylor has served since 1984, and has built up a very strong brand in his district, but even so, such a massive outperformance of the top of the ticket is quite impressive.

I hope you enjoyed the maps! Questions and comments can be directed to ghnaigles@gmail.com.