Note: The following article and maps was written and created by Gregory Naigles. You can check out the rest of his work at his website here.

To follow up on the maps that I made of the 2012 elections in Pennsylvania, I have made a series of similar maps – but this time for the 2014 elections.

I’ll begin with the top of the ticket: the 2014 gubernatorial election, where Tom Wolf (D) defeated Tom Corbett (R) by a 55-45 margin (click on the maps for a full-size view). 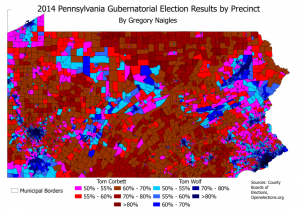 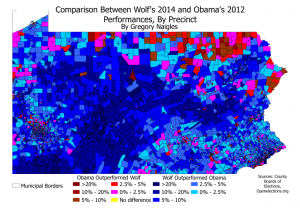 Wolf outperformed Obama by only 3 percentage points; getting 55 percent compared to Obama’s 52 percent. So why does the above map look like he outperformed Obama by a lot more than that? The major reason for this is that Wolf only barely outperformed Obama in many of the most populated areas of Pennsylvania, including both Philadelphia and Pittsburgh. In addition, those cities tended to have disproportionately large drops in turnout from 2012 to 2014, which blunted their impact on the 2014 results. Additionally, the areas where Wolf outperformed Obama by the widest margins are generally large in area but smaller in population.

But what patterns can be seen from this map? Wolf outperformed Obama heavily in some of the more rural areas of Pennsylvania, including the counties of Greene, Fayette, Somerset, Cambria, Northumberland, and Schuylkill. These areas have large numbers of working-class voters and economies that rely on coal mining (both anthracite and bituminous). The coal mining industry has been hit hard by the rise of fracking, so Wolf’s proposal to tax fracking undoubtedly played well in those areas. Of course, that same proposal was much less popular in areas where fracking provides lots of jobs, namely the northeastern Pennsylvania counties of Bradford and Susquehanna. Those are some of the areas where Wolf underperformed Obama.

In addition to the coal mining areas, Wolf also heavily outperformed Obama in the vicinity of Penn State University and the town of State College. This is due to the fact that Tom Corbett was extremely unpopular there due to his actions regarding the Penn State/Jerry Sandusky scandal. The fact that Wolf won Centre County (home to Penn State) by a 15-point margin despite very low turnout in the Democratic stronghold of State College is an incredible feat, and one that is very unlikely to be repeated anytime soon.

Finally, the map also shows pretty clearly where some of the most inelastic, straight-ticket voters in Pennsylvania are. Places like Lancaster County, the Harrisburg area, and some of the Philly suburbs saw Wolf only slightly outperform Obama, since most of the voters in those places tend to vote for the same party for every office (while the areas where Wolf outperformed Obama by larger margins tend to have more ticket-splitting in general). Wolf also failed to outperform Obama in the northern suburbs of Pittsburgh, where Corbett is from.

This next map shows the results of the 2014 Congressional elections in Pennsylvania, by precinct. 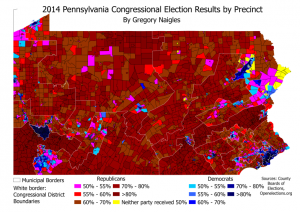 A few things to mention before I present the next map: three incumbents, Mike Doyle, Charlie Dent, and Tim Murphy, were unopposed in 2014. That is why every precinct in their districts is either dark blue (Doyle) or dark red (Murphy and Dent). In addition, Tom Marino’s district featured an independent candidate who received over 10 percent of the vote, which is why there are a bunch of precincts colored yellow in his district. 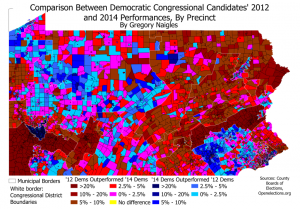 This map compares the performances of the 2012 and 2014 Democratic congressional candidates in each district. A few patterns of note:

1. Without Mark Critz as an opponent, Keith Rothfus substantially improved on his performance almost everywhere in his district, but particularly in the Johnstown area.

3. Matt Cartwright substantially underperformed his 2012 performance in Schuylkill County (due to the fact that his 2014 opponent was from there, and his 2012 opponent was not), but he actually outperformed his already very strong numbers in the Scranton/Wilkes-Barre area, possibly for the same reason.

5. Manan Trivedi slightly outperformed his 2012 numbers in 2014, due to the fact that the district was an open seat in 2014. He didn’t come close to winning, though.

6. If you look closely at the Philadelphia area, you’ll see that Brendan Boyle generally outperformed Allyson Schwartz in Philadelphia, while underperforming her in the Montgomery County portion of the district. This makes sense, since Boyle is from Philadelphia, while the three candidates he defeated in the Democratic primary were all from the suburbs.

This next map compares the 2014 Congressional election results to the gubernatorial results. 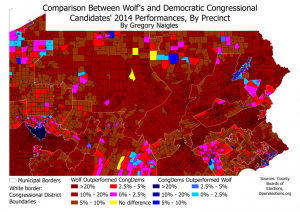 We now move on to the 2014 State Senate elections. Only half of Pennsylvania’s state senate districts had elections in 2014, which is why half of the map is white. 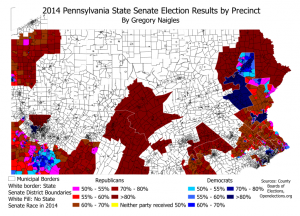 As the map shows, there weren’t very many competitive elections. Most of the districts that had elections saw either unopposed incumbents or one party winning in a landslide. The closest election here was the 26th district in Delaware County, an open seat, where Republican Tom McGarrigle scored big wins in Springfield, Marple, and Newtown, which were enough to overcome losses in Upper Darby and win by a 52-48 margin.

This next map compares the state senate results mapped above to the 2014 gubernatorial election results: 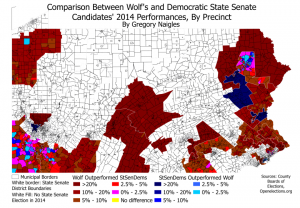 The final two maps here involve the state House results, which were a bit more interesting. 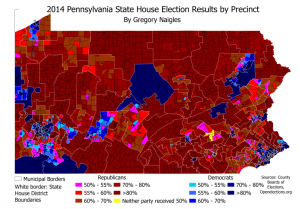 As the map shows, a large number of candidates on both sides ran unopposed, but there were some very interesting patterns, as the next map will make clear. This final map compares Wolf’s performance to that of the Democratic state House candidates.

I hope you enjoyed the maps! Questions and comments can be directed to ghnaigles@gmail.com. And don’t forget to check out my 2012 precinct maps of Pennsylvania.