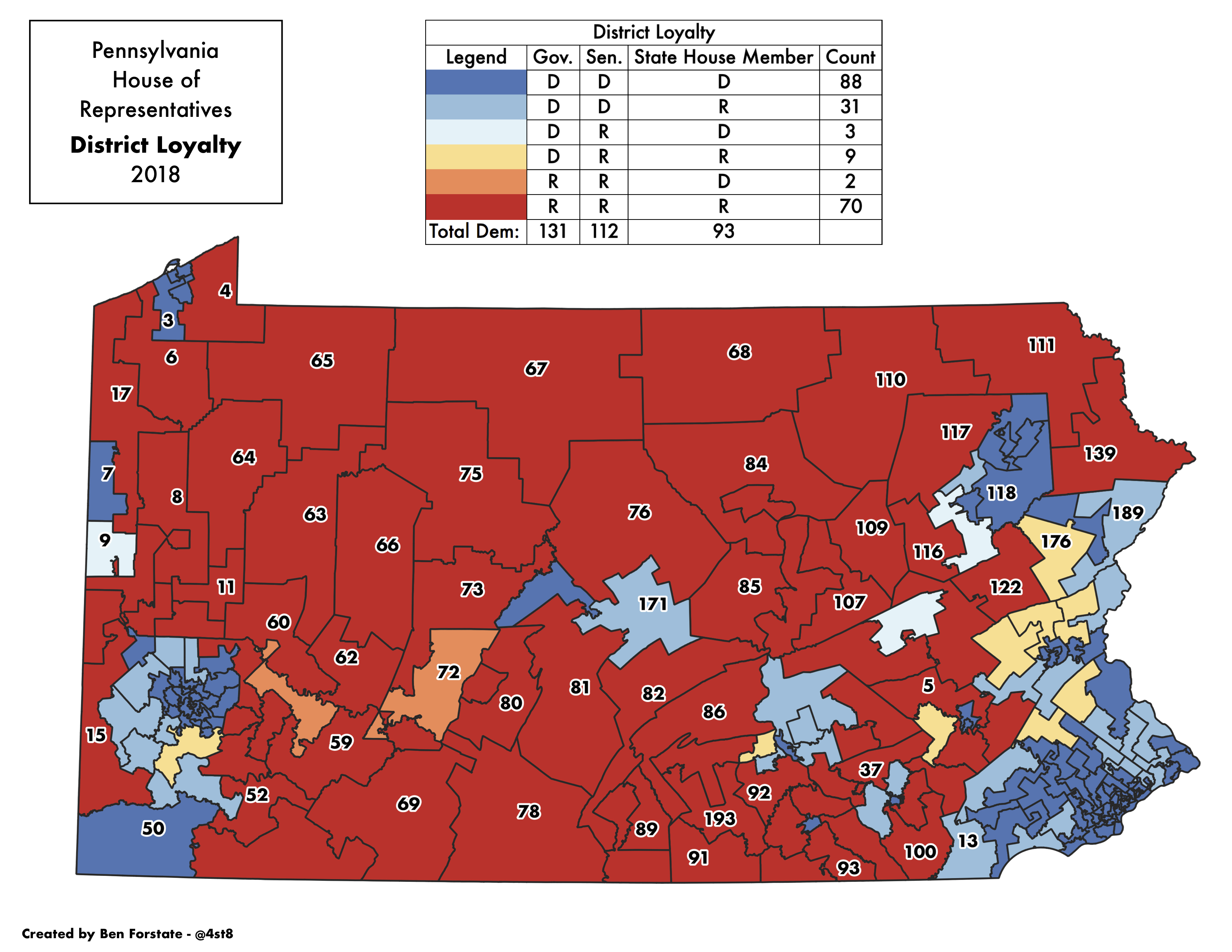 In 2016, Donald Trump shattered the Democrat’s blue wall and became the first Republican Presidential nominee since George H.W. Bush to carry Pennsylvania’s electoral votes. Yet instead of ushering in an era of GOP dominance in Harrisburg, 2016 now looks to be a high-water mark for the PA Republican party.

In the years following President Trump’s victory, two Republican Congressmen left office under a cloud of scandal, the party fumbled a special congressional election in a seat Trump had carried by 20 points, the state Supreme Court instituted a new congressional map providing Democrats with an easier path to pick up additional congressional seats, and the top ballot GOP candidates for Governor and U.S. Senate were crushed by the Democratic incumbents in the 2018 midterms.

The carnage extended down-ballot as well with Democrats netting three additional congressional seats, five State Senate seats, and 11 seats in the State House. These gains mean that in November 2020, the PA Democrats will need just to flip three seats to tie the state Senate and nine to take control of the State House.

In a series of articles, I’ll be analyzing the results from the 2018 PA Governor and Senate races and exploring their implications for the 2020 PA House elections.

The map below shows the current political makeup of the House.  As of April 2019, Democrats control 93 out of 203 of Pennsylvania’s State House seats, or about 46%. This is the closest they’ve been to controlling the lower chamber of the General Assembly since 2010, a time when Democrats were in the majority. 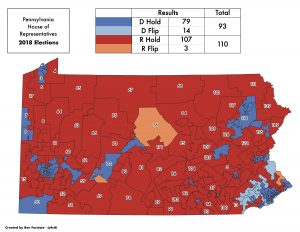 Now, compare that map to Gov. Wolf’s results in the same districts. The Governor’s 17% margin of victory allowed him to carry 131 out of 203 seats or 65%. Had Democrats won every seat Wolf carried, the party would now stand just three seats short of a super-majority in the chamber. 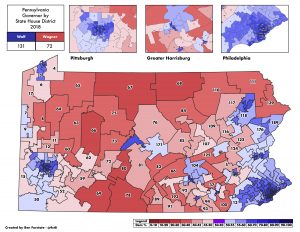 The sheer geographic scope of Wolf’s win is impressive. Historically, Democratic dominance was confined to the Southeastern, Northeastern, and Southwestern corners of the state. Wolf won everywhere. The Governor won every seat within the city of Philadelphia and its collar counties; every seat in the Lehigh Valley and all but one in Allegheny County.  Wolf also held on to the ancestrally Democratic Monongahela Valley and made significant breakthroughs in vote rich, but staunchly Republican South Central PA.

Thanks to data compiled by Daily Kos Elections and Project Open Elections, we can compare Wolf’s 2018 PA House map to his results in 2014. 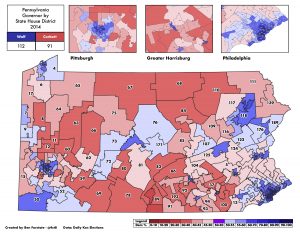 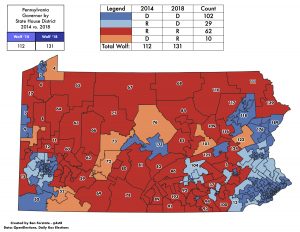 Compared to 2014, Wolf increased his statewide margin by just 4%, yet he won 19 more state house districts in his latest election. Moreover, just 10 seats flipped from Wolf ’14 to Wagner ’18. Compared to 2014, Wolf lost ground in the traditionally Democratic archipelago of counties in central PA (Cambria, Clearfield, Clinton, Centre, and Elk) while making up those losses in the populous suburbs of Pittsburgh and Philadelphia.

Casey’s 2018 PA House map differs only slightly from the Governor’s. Despite winning by just 4% less than Wolf, the Senator carried 119 or 6% fewer seats. 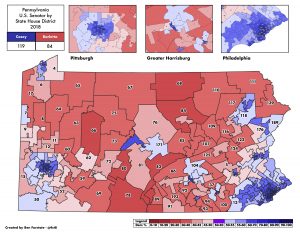 Casey ran behind Wolf primarily in exurban Philadelphia, suburban Allentown-Bethlehem, and around Harrisburg. He also failed to carry several of the ancestrally Democratic districts that both voted for Wolf and are currently represented by a Democrat.

Compared to 2012, the last time he was up for re-election, Casey’s margin of victory improved by just 2%, but the number of house seats he carried increased by 23% from 97 to 119. Like Wolf, Casey’s biggest improvements were concentrated in the suburbs of Philadelphia and Pittsburgh. 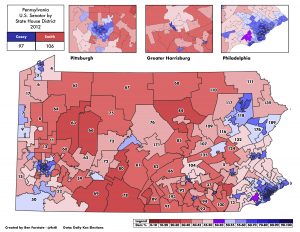 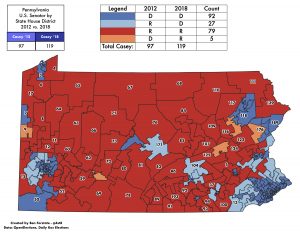 An additional way to illustrate the lay of PA’s political geography is through a district “loyalty” map. Loyalty in this case describes how voters in each PA House district split their ballots between the Gubernatorial, U.S. Senate, and PA House elections. 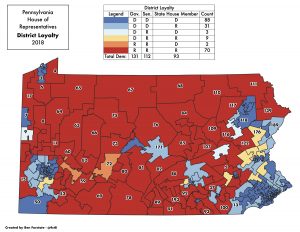 Last November Pennsylvanians in 88 legislative districts voted Democratic in the Gubernatorial, U.S. Senate, and PA House elections. 70 districts voted for both statewide Republican districts and elected a Republican representative to the state House. Finally, in between those two ideological poles, there are 45 districts where voters split their ballot and elected a mix of Democrats and Republicans. These 45 seats are roughly the battleground on which the battle for control of the state House will be waged.

So what does this all mean for 2020? While it’s too early to make a firm prediction about overall control, the topline is that both Democrats and Republicans hold several seats at risk of flipping to the opposite party. Check back soon for part two where I’ll highlight the top five Democratic held seats at risking flipping, and part III when I’ll finish the series with the top five GOP seats most at risk.