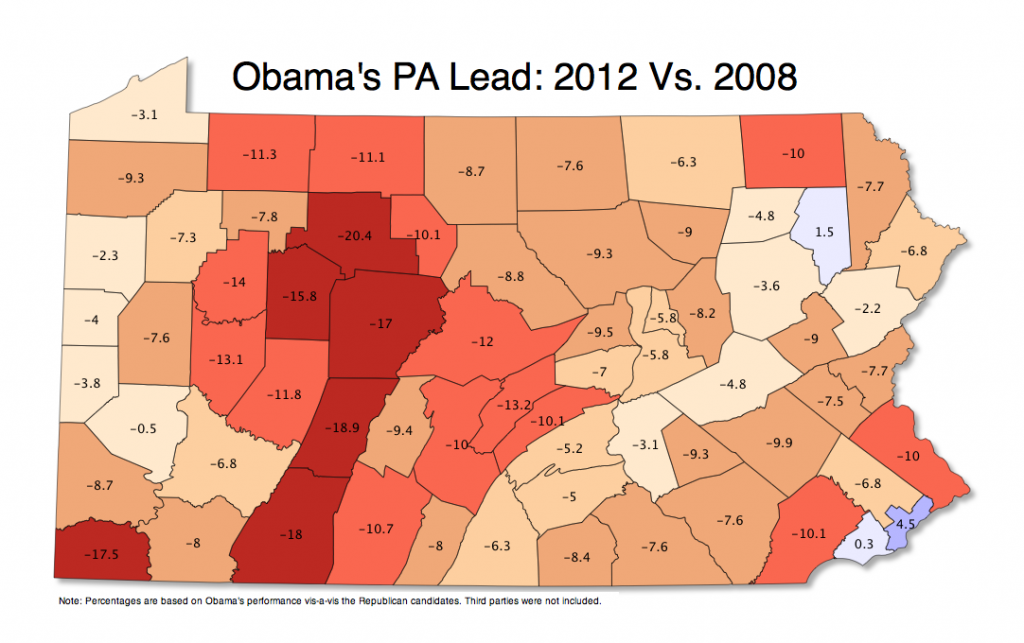 Barack Obama scored a solid win in Pennsylvania on Tuesday despite losing ground in nearly every county in the state. Take a look at where the President took the biggest hit, as well as the three places where Republican Mitt Romney underperformed John McCain.

PoliticsPA compared the margin of Obama’s win in 2012 to his margin in 2008 on a county-by-county basis. For example in Philadelphia, Obama defeated Romney by more than 71 percent on Tuesday. He bested John McCain by 67 percent in 2008, a new improvement of more than 4 points.

So, now that Obama’s numbers have come down to earth from their nadir in 2008, will Pa. return to the battleground conversation in 2016, or are we consigned to second-class blue state status?

“There isn’t any doubt that the Obama coalition this year was the same coalition that elected him in ‘08,” said Franklin and Marshall pollster Terry Madonna. “How did we get from 10 points to 5? The answer is simple: Obama didn’t do as well in the Philly suburbs as he did four years ago.”

However, Madonna said, the GOP didn’t do as well as it did 8 years ago.

“The Republicans in their base, in places like Lancaster and Lebanon and York, in south central Pa. where you have the largest number of their voters, went somewhere between where they were in 2004 and 2008. They didn’t have the same strong vote for Romney as the did for Bush in ‘04,” he noted.

PoliticsPA also looked at Obama’s advantage in 2012 versus Democrat John Kerry’s when he beat President George W. Bush in Pa. in 2004 (map below).

By the same token, he did far worse than Kerry in western Pa.

Will that dynamic – surging Dems in the east versus a stronger GOP in the west – hold true for 2016? Maybe, to some degree. His background and strong support among minorities made Obama uniquely formidable in eastern Pa., just as they – and his reputation for antipathy toward the coal industry – made him uniquely weak in western Pa.

In any case, when Hillary Clinton, Joe Biden, Martin O’Malley or whoever begins opening up campaign offices in Pa. in 2016, don’t be surprised to see them in Lancaster, York or Carlisle.

Likewise, when Chris Christie, Marco Rubio, Paul Ryan or Mitch Daniels sets up shop, don’t be shocked by a major push in Johnstown or Uniontown. 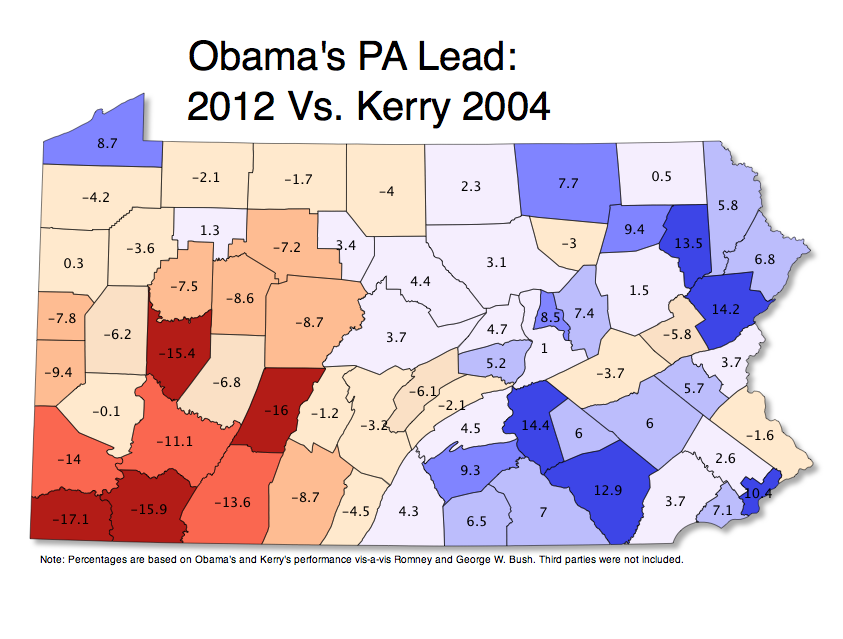