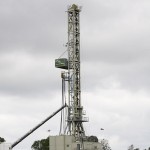 The Commonwealth should enact a limited impact fee through which natural gas drillers would essentially reimburse local governments for a range of costs associated with drilling activity, according to the final report compiled by Governor Tom Corbett’s thirty-member Marcellus Shale Advisory Commission.

“The imposition of any fee should be accompanied by appropriate statutory changes to ensure fair and consistent municipal regulation which does not unreasonably impede the development of natural gas,” the report stipulated.

Another of the commission’s 96 recommendations: Developers should be obligated to notify landowners and municipalities within 2,500 feet of a proposed well (the trigger distance is currently 1,000 feet).  And the so-called “setback standard” should also be increased in relation to bodies of water, the commission noted.

Lieutenant Governor Jim Cawley, who chaired the commission, called the recommendations “an important, first step toward creating tens of thousands of jobs and leading the nation toward energy independence and doing so in an environmentally responsible way.”

The commission’s proposals come two days after a report by the Marcellus Shale Coalition predicted that the Commonwealth’s natural gas production this year would more than double last year’s output.

As that output and activity continue to increase, the Commonwealth must establish uniform emergency response plans to be adopted throughout the state and develop job training and certification programs for workers in the burgeoning industry, the commission suggested.  Economic development guidance should also be provided to “rural regions unaccustomed to rapid economic growth,” according to the 137-page report.

Though its recommendations will likely shape any legislative debate regarding Pennsylvania’s exploding Marcellus Shale industry, the commission itself has come under fire by critics who allege that it was overpopulated with industry officials and Corbett loyalists.