One day after the release of Phil Scollo’s first TV ad, Republican Tom Marino has put out an commercial of his own. It’s a 30 second positive spot about his accomplishments as a Congressman and former U.S. attorney. 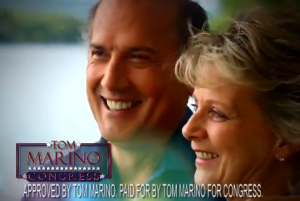 “There are few as tough as Tom Marino,” says the announcer, doing his best impression of McGruff the Crime Dog.

“As U.S. Attorney, Marino took on drug dealers, organized crime, pedophiles and scam artists who preyed on seniors,” he continues, listing some of Marino’s accomplishments from his time spent in office.

Along with his attempts at keeping citizens safe, Marino’s ad also touts his stance on Obamacare. ”Now, Marino is standing up for taxpayers by taking on Obama and the D.C. crowd that support more debt and higher taxes. Marino is fighting to repeal Obamacare, to stop the billions in cuts to Medicare, and the job killing taxes.”

Scollo has also Issued a response to Marino’s ad, calling it an “less of a traditional political attack ad and more of an attack on the truth.”

Scollo has also gone through a claim-by-claim rebuttal, most notably raising the point that both House GOP budgets Marino voted for maintain the $716 billion in cuts that Obamacare makes to Medicare.

“Everyone knows Mr. Marino has the money and the Washington connections to run fancy TV ads that distort his record but hard-working people deserve the truth from Tom Marino and they deserve to hear it straight from his mouth. He voted twice to end the Medicare guarantee and he should have the courage to stand up in a debate on Medicare and explain why,” Scollo said.