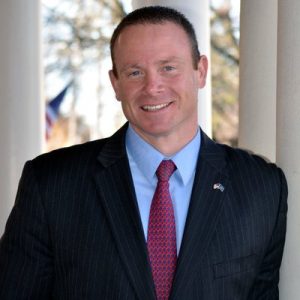 A GOP state Senator from Lancaster County is formally weighing a run for Governor in 2022.

State Sen. Scott Martin (R-Lancaster) announced on Tuesday morning that he has launched an exploratory committee for the statewide office.

“Running for Governor is not a decision that should be taken lightly, nor is it an effort that can be successfully done alone. While I have heard from many people encouraging me to run, I want to take the time to make sure that the support needed to run a winning campaign is truly there – especially among the grassroots volunteers who are the engine of any campaign – because to change Pennsylvania for the better, we must first win,” Martin said in a press release.

“Maybe that makes me different than the countless other candidates who have jumped in with both feet or announced an exploration, and then candidacy within fourteen days, but I believe the best thing is to find a candidate with broad-based support across Pennsylvania,” he continued.

Martin is currently serving his second term in the state legislature.

He was elected in 2016 to represent the 13th state Senate District after defeating Democrat Gregory Paulson by 15 points for the open seat. In 2020, Martin was one of the Democrats top targets in the state Senate, but the Lancaster County Republican secured a second term by besting Democratic challenger Janet Diaz by 11 points.

Prior to being elected to the state Senate, Martin served as the Lancaster County Commissioner for two terms.

Martin touts being a “strong conservative” who is an advocate for “fighting for limited government, support of the free market and job-creating small businesses, protection of the unborn, and preservation of the 2nd Amendment rights of law-abiding citizens.”

He added in his exploratory announcement that Pennsylvania needs a “restart” and specifically mentioned former President Donald Trump by name.

“The people I have talked to across our state want a Governor who isn’t afraid to say ‘no’ to the status quo, isn’t afraid to say ‘no’ to the insiders, and ‘no’ to how things have always been done. That’s what made President Trump appealing to them,” Martin responded, in the press release, to a question about the number of candidates seeking to wear the “Trump mantle” for the upcoming Primary Election. “They want change that puts them front and center in decision-making – be it from policies that create good jobs, to reforms that make schools better, to tax changes that put a little bit more back in their pockets to help witheveryday life. I believe I am that kind of leader. I believe my record proves it. And I believe all voters – not just Republicans – will respond to it.”

The GOP race for governor is shaping up to be a crowded field, while Attorney General Josh Shapiro has been viewed as the Democratic frontrunner for Governor.