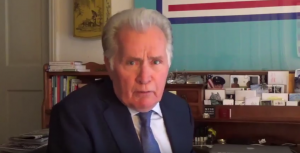 The Commonwealth Court is not exactly the West Wing, but former President Josiah Bartlet has made it clear he supports Judge Joe Cosgrove.  Actor Martin Sheen, who portrayed Bartlet in the West Wing, called on Democratic committee members to endorse Cosgrove.

The ad begins with Sheen reading a “proclamation” from President Josiah Bartlet. In the proclamation, Bartlet re-appoints Cosgrove to a full term on the Commonwealth Court.

“I do not have the power to assure Judge Cosgrove’s continuance on the court, but your endorsement of him would certainly go a long way in making that possible, and that’s my point,” Sheen then says.

This weekend the Pennsylvania Democratic Party will be meeting to endorse its slate of candidates for the statewide judicial elections this year.

Martin talks about the friendship he and Cosgrove have, spanning over 40 years.

“I promise you, you will discover not only a fully qualified judge, but equally a scrupulously honest man, and what more could you possibly ask from a judge,” Sheen concludes.

Cosgrove, of Wilkes-Barre, was appointed to an open seat on the Commonwealth Court by Gov. Tom Wolf in July. He has served as President of the Pennsylvania Association of Criminal Defense Attorneys and the Luzerne County Bar Association, and as Assistant Dean of Students and adjunct professor of constitutional law at King’s College

You can see the whole video here: