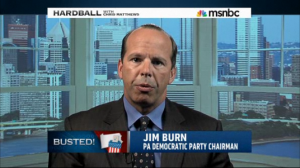 Watch out Biden – Chris Matthews has another presidential backup in mind.

The conversation continued on to Governor Romney himself, with Burn explaining why he was a “weak” Republican candidate.

“47 out 50 in job creation in Massachusetts, Bain Capital – running businesses into bankruptcy to make profits, not being able to connect with average Pennsylvania voters, failing to step up and take a statement on any significant issue, rather he would kick the can down the road and point to the President. The President has had the courage to step up and make difficult decisions. All that this candidate can do is criticize this man’s leadership. He has no plan of his own.”

This sparked Matthews’ to compliment Burn:

“You’re the best surrogate we’ve had on for Obama. We can’t get Cabinet members or senators to talk [better than] you. You’re the one that ought to be running the surrogate operation because that’s a really good distillation of what the problem is with Romney is.”

Burn, an attorney and former elected official from Allegheny County, has served as party chair since summer 2010.

“This was always about suppressing votes of the people who vote the ‘wrong way’ and the numbers we have are closer to 700,000 voters that include poor people, African Americans, handicapped people, senior citizens and students – all groups that conveniently enough happen to all vote overwhelmingly Democratic.”

All of these prominent Pennsylvania Dems are moving the issues beyond their state platform, to national television, to make it clear to the American public that the Voter ID law is about political gain, not voting security.

Update: A Republican friend flags this article about Matthews, from a time when he was less skeptical about voter fraud in PA:

MATTHEWS: Because they — and I know this goes on. It has gone on in old-time politics. It has gone on since the ’50s that I know about. People call up, see if you voted or you’re not going to vote. The, all of a sudden, somebody does come and vote for you. This is an old strategy in big city politics.

“I know all about it in North Philly. It’s what went on. And I believe it still goes on. The question is, can we correct it without screwing up our system? I want people to vote, that’s the number one goal. But I also want to make sure people don’t cheat. So, let’s get out of here.”