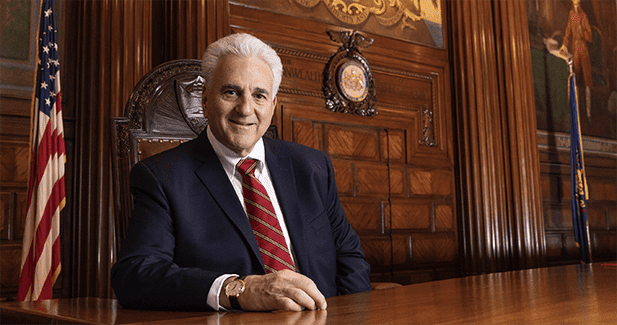 Max Baer, chief justice of the Pennsylvania Supreme Court, died overnight Friday at the age of 74.

Baer, who was set to retire at the end of the calendar year, died at his home in Pittsburgh. No reason was given as a cause of death.

Justice Debra Todd now assumes the chief justice role “as the justice of longest and continuous service on the court.” She is the first female chief justice in the commonwealth’s history, a court spokesperson confirmed.

“Chief Justice Baer was an influential and intellectual jurist whose unwavering focus was on administering fair and balanced justice,” Todd said in a release. “He was a tireless champion for children, devoted to protecting and providing for our youngest and most vulnerable citizens.”

“His distinguished service and commitment to justice and fairness spanned his decades on the bench – first as a family court judge in Allegheny County and eventually as administrative judge in family court before being elected to serve on the Supreme Court.”

“I’m extremely saddened to learn that Chief Justice Baer passed away,” said Wolf. “He was a respected and esteemed jurist with decades of service to our courts and our commonwealth. I am grateful for his contributions and leadership in the Supreme Court.”

“His impact on the judiciary is immeasurable and marked by his moral courage and untarnished reputation for fairness, honesty and integrity. The Chief personified all that is good about the work and the role of the courts, focusing his life’s work on meeting the needs of children and their families.”

Baer, a 1971 graduate of the University of Pittsburgh and a Duquesne Law graduate, served as deputy attorney general for the Commonwealth from 1975-80 before entering private practice.

He was elected to the Court of Common Pleas in Allegheny County in 1989 and as a justice to the Pennsylvania Supreme Court in 2003. Baer was sworn in as chief justice in 2021.

Baer was set to retire at the end of 2022 after reaching the mandatory retirement age of 75. The court said the seat had already been slated to be on the 2023 ballot, and “in the interim the governor may choose to make an appointment, subject to confirmation by the Senate.” Baer was elected as a Democrat and his death leaves a 4-2 Democratic majority on the high court.

Baer’s replacement on the seven-member court must be appointed by the governor and confirmed by two-thirds of the state Senate. Whether that appointment will be made by the term-limited Tom Wolf, a Democrat, or his successor is not yet known. The state Senate is scheduled to meet only seven more times this year.

“Justice Max Baer was a legal giant, a truly kind man and a dedicated public servant to our Commonwealth,” said Attorney General and Democratic candidate for governor Josh Shapiro. “His impact will be felt for generations. He’s left an indelible mark on the Supreme Court. May Max Baer’s memory be a blessing.”

Speaker of the PA House Bryan Cutler (R-Lancaster) said, “On behalf of the Pennsylvania House of Representatives, I would like to offer my sincere condolences to the family of Chief Justice Baer and acknowledge his service and contributions to Pennsylvania. The chief justice was an honorable man doing a difficult job.  He was respectful, honest and carried himself with dignity and integrity. Those are all the hallmark qualities of a true public servant, regardless of title or position.”

House Democratic leader Joanna McClinton said in a statement that “Justice Baer’s contributions to our commonwealth cannot be overstated. He was a giant in the Pennsylvania legal community for more than 40 years, having served in the Attorney General’s Office, in private practice, and as a judge and, most notably, as chief justice on the state Supreme Court. Throughout his career, he was a champion of the commonwealth’s children, earning multiple accolades for his advocacy. Most recently, Justice Baer had been a fierce defender of free and fair elections. I have no doubt that his legacy to Pennsylvania will endure.”

He is survived by his wife, Beth; sons Benjamin, an attorney in Philadelphia, and Andrew, a lieutenant colonel in the Air Force; and five grandchildren.