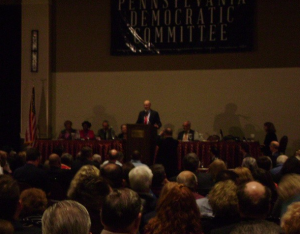 It’s quite a period of turmoil for the PA Democratic Party.

They hold the Governorship, but are vastly behind in the legislature. They have another popular statewide elected official in the Auditor General, yet also must deal with the never ending scandals of the embattled Attorney General and disgraced ex-State Treasurer.

It was in that context that the state committee met his weekend to decide which candidates to endorse in this April’s primary.

Governor Tom Wolf was also enthusiastically received although his address was full of familiar lines about the budget stalemate.

The question on everyone’s minds, however, was whether there would be endorsement votes in the contested primaries for Senate and Attorney General.

New Chairman Marcel Groen made clear that he wanted the party to remain non-committal while former Chairman Jim Burn spoke passionately for an open vote.

It was an intriguing contrast, Groen up at the podium for the first time unable to corral the party on this question. Meanwhile, Burn patrolled the back of the crowd (right in front of the media area) and got a standing ovation when he took the mic.

After it became clear that enough participants wanted a vote, the three Democratic Senate candidates in attendance each got one final chance to pitch themselves to the assembled.

Those pleas likely didn’t make a huge difference, though, as the assembly was already starting to vote.

334 members and proxies were in attendance and a two-thirds majority of 223 was needed to secure an endorsement.

On the first ballot, McGinty received 163 thanks to a plurality among the Allegheny delegation and a huge advantage in Philly. Sestak finished second with 137, taking support from the other areas of the state. Fetterman came in a distant third with 34 votes and one member abstained.

Per party rules, Fetterman’s name was dropped and the party proceeded to vote again in a straight McGinty vs. Sestak matchup on the second ballot.

McGinty came out ahead 173 to 149 with one abstention. Interestingly, most of Fetterman’s support seemed to go to Sestak except in the Southeast. Nonetheless, neither candidate came close to the endorsement.

The AG race, however, was a different case. The Zappala people were the main drivers for a vote and it appeared that they felt their forces might just have the two-thirds majority.

Stephen Zappala and Josh Shapiro both spoke to the committee (John Morganelli wasn’t there and asked beforehand that his name not be placed in nomination) as ballots were passed around and filled out.

Zappala swept Allegheny and did surprisingly well among the Philly delegation yet Shapiro carried a strong majority in the Southeast.

The Allegheny County DA came up just short of the 223 threshold, ultimately earning 208 votes. Shapiro finished with 121 while there were two abstentions.

While neither candidate got the endorsement, it’s clear McGinty and Zappala are the choices of the party faithful. It’s still very much unclear, though, whether that will matter on April 26th.