Another blow for Philadelphia broadcast networks.

Rep. Pat Meehan (R-Delaware) has cancelled about $500,000 that had been slated for television ads from Oct. 22 through election day.

Numerous candidates and committees, from the presidential campaign down to the congressional races, have taken a pass on Philadelphia TV this cycle. 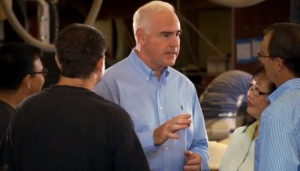 The campaign will continue its advertising plans on cable, which began Monday with the ad above.

Meehan, a freshman Republican, is facing Democratic attorney George Badey. Badey has not yet gone on television; his campaign sent a fundraising email to supporters Thursday asking for contributions to do so.

Pa.’s 7th district was once considered one of the most feasible pickup opportunities for Democrats because it is the former seat of Democrat Joe Sestak, who ran for U.S. Senate in 2010 rather than re-election to Congress. But a combination of redistricting and delays over candidate recruitment yielded a slow start against Meehan, a well-known and well-liked former District Attorney.

In Washington, Meehan has emerged as a rising party leader; his prolific fundraising shows it. He’s brought in $2.4 million so far this cycle, more than any other Republican in Pa. His $1.44 million on hand is also the best of any Pa. Republican. And with this decision to cancel ad spending, he’ll be able to bank that money for the 2014 cycle.

The ad above was created by Chris Mottola and if it seems familiar, that’s because it is. Mottola’s testimonial-style ads are a trademark that many might remember from his work on the campaigns of Arlen Specter.

More than sharing a media consultant, Meehan actually worked Specter as a special counsel in the 1990s. He was one of the pallbearers at the late Senator’s memorial service on Tuesday.

“Pat Meehan gets it. He understands the need for good, American manufacturing jobs and that’s what he’s working for,” says Dominic Pino of Geobelwood Industries. “Pat understands small business.”

“Pat Meehan’s whole campaign is about trying to trick voters into thinking he’s a moderate. He’s not. When it really matters, Pat Meehan votes with the radical right wing of his party,” Badey said. “Two years ago he promised voters he would never vote to privatize Medicare, but then he broke that promise – twice. Breaking promises and ending Medicare as we know it are not the hallmarks of a moderate. His ad? Just another distraction from his actual voting record.”