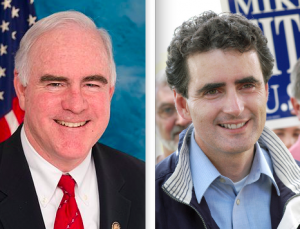 Just how “Tea Party” are Reps. Pat Meehan and Mike Fitzpatrick? Not very, according to the Club for Growth. The conservative group released a scorecard of freshman Republicans, and found the SEPA congressmen in the bottom 5.

“The Club for Growth holds members of Congress accountable for their actions, not their rhetoric,” said group President Chris Chocola. “The liberal media likes to pretend that these Republicans have fought for fiscally conservative policies, but the facts don’t support their thesis.”

Meehan had the second-lowest rating, Fitzpatrick was fourth-lowest.

They lost points for voting in favor of the debt ceiling compromise, and against a measure to strike funding for the National Labor Relations Board. They earned points for supporting the Cut, Cap and Balance plan, and supporting free trade agreements with South Korea and Colombia.

And they were hardly alone: all five of PA’s freshman Republicans found themselves in the bottom 50 percent of the list. There are 87 freshman GOPers in Congress, and members from the Keystone state all fall into the bottom third.

The Club disappointedly notes that the average score for freshmen was 71 percent, a mere 2 percent higher than GOP incumbents.

Click on a name to see which votes counted for and against each member.

“Congressman Meehan said he would work to cut taxes, help small businesses create jobs, balance our budget, hold the federal government accountable, and repeal and replace the health care law,  and that’s exactly what he’s done,” she said. “He’ll continue to be an independent voice fighting for the people of Pennsylvania’s 7th District.”

The Tea Party label matches Meehan, according to his Democratic opponent George Badey.

“We didn’t make Meehan a Tea Partier,” said Campaign Manager Mike Dineen. “The Independence Tea Party PAC (sic) did with their endorsement. Scorecards or statements don’t change Pat Meehan’s two votes to end Medicare as we know it, while preserving billions in tax breaks for oil companies and people earning more than one million dollars a year, or his votes restricting access for women and children to vital healthcare services.”

“Congressmen Pat Meehan and Mike Fitzpatrick have been extremely responsive to our concerns and have kept the lines of communication open to our organization and other Tea Party groups and we think, earned our endorsement in this cycle,” he said.”

“Perhaps, Club for Growth, and other so-called national ‘Tea Party’ organizations should check with local Tea Party groups before issuing scorecards which do not fairly weight the votes of Congressmen/women on major legislative initiatives such as the Ryan Budget.”

Being close to the Tea Party isn’t exactly an asset in moderate southeastern PA. Aside the wave year of 2010, when the movement meant organization and voter turnout for candidates, it’s unclear the long term benefits.

“Congressman Fitzpatrick always votes his conscience and his district.  Voters are looking for elected officials who can get government spending in check without harming those who need our help the most.  Voters aren’t looking for ideologies, they want results,” she said.

His critics are quick to assign him the Tea Party moniker. CREDO, a liberal super PAC, chose Fitzpatrick and 9 other incumbents nationally to target as their “Tea Party Ten.”

And his Democratic opponent, Kathryn Boockvar, says Fitz is too conservative for the district.

He has, “consistently fought to put special interests ahead of seniors, women, and middle class families,” she said, “repeatedly voting to end Medicare as we know it and to make healthcare and college tuition less affordable, while at the same time preserving enormous tax breaks for oil companies and billionaires.”

“Congressman Fitzpatrick isn’t representing the priorities of families in Bucks and Montgomery counties — and that’s what this election will be about.”

The Club isn’t too sympathetic with the electability argument.

“We produced this report to hold the Republicans accountable for their actual voting records,” said spokesman Barney Keller. “If liberal Republicans like Mike Fitzpatrick and Pat Meehan want to vote for big government, that’s between them and their constituents. All we’re saying is that, based solely on their voting records, you can’t call them ‘tea party’ because they were elected in 2010.”

“Furthermore, it’s in the interest of all Americans that members of Congress start limiting government now, before we wind up like Greece.”