In Saturday’s weekly GOP address, Rep. Pat Meehan (R-Delaware) called on the Democratic-controlled Senate and President Obama to cooperate with the Republican House in order to “end the gridlock and get our economy moving.”

“The need for Washington to act on jobs is as urgent as ever..” Meehan said.  “…House Republicans have offered good ideas that will help create jobs, but to execute them, we need leadership from President Obama and his fellow Democrats who control the Senate.” 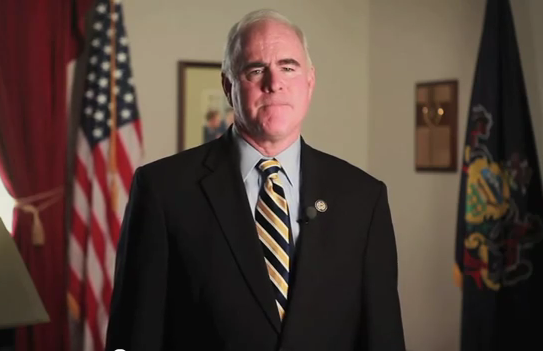 Meehan discussed the need for congressional bipartisanship to remove government barriers to job creation, support for small businesses and support of American infrastructure.  The key to solving America’s problems, he stressed, is ensuring that available resources are allocated to projects that can directly boost the economy.

He stressed the need for the Senate to consider 30 bipartisan job bills that have passed the House.  One of these bills would extend the payroll tax cut for a year, and another which pledges support to energy and infrastructure plans which are expected to create one million private sector jobs.

“Pennsylvania has more structurally deficient bridges than any other state, and a million people in the commonwealth are out of work,” Meehan said.  “Repairing our roads and bridges isn’t just a safety issue, its an economic one.”

Meehan’s office helpfully emailed a run down of positive reactions to the address. Here they are:

Republicans are “noting the similarities between their plan and some of President Obama’s goals. The president also is calling for more energy production — particularly natural gas — as well as infrastructure repairs.

“This is another good idea that will help put Americans back to work, and it, too, is built on common ground,” said Rep. Pat Meehan, R-Pa., in Republicans’ weekly radio address. “The president supports improving infrastructure and recently echoed our party’s call for an ‘all-of-the-above’ energy strategy.”

Republicans say they want Obama’s help in passing a payroll tax cut extension for a full year and proposals to expand energy production and repair and rebuild roads and bridges.

Rep. Pat Meehan, R-Pa., said in the Republican address that their energy and infrastructure agenda would create more than a million private-sector jobs, “not by wasting your money on pork-barrel projects and so-called ‘stimulus’ spending, but by removing government barriers that are getting in the way of American job growth.”

Meehan said the nation’s unemployment rate had exceeded 8 percent for the past three years, “the longest stretch since the Great Depression.”

Giving the weekly radio address for the Republican Party, Pat Meehan said “The need for Washington to act on jobs is as urgent as ever.”

He said action is needed now because the “unemployment rate has now exceeded 8% for three years running–the longest stretch since the Great Depression.”

Mr. Meehan said people want to see gridlock end in Washington, and called on President Obama to help pressure Senate Democrats to support a series of Republican-led proposals aimed at lifting the economy.

Mr. Meehan said he was heartened to hear President Obama this week “endorse” a series of proposals that would benefit small businesses, “but what would really be helpful is for him to urge the Senate to actually vote on them.”

The president this week reiterated a call for tax benefits to help small businesses and start-ups. Republicans have proposed and supported similar measures.

Mr. Meehan also urged Democrats to support a series of other proposals, including an energy and infrastructure plan that Republicans say would create jobs.

He said action is needed now because the “unemployment rate has now exceeded 8% for three years running–the longest stretch since the Great Depression.”

He urged the Senate to pass two House bills-one that would extend the payroll tax cut and another that aims to improve energy and infrastructure. Both proposals have passed the House but would need to clear the Democratic-controlled Senate.

“Our economy faces serious challenges right now – gridlock in Washington doesn’t have to be one of them,” Meehan said. “The House is acting on good ideas, and with help from the president and Democrats in the Senate, we can get things done. The people we represent sent us here to find solutions and move the country forward – not further divide it.”