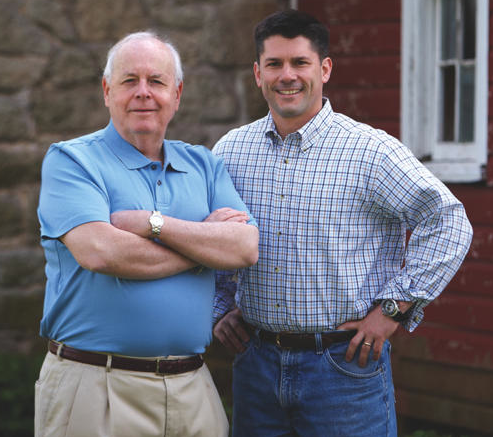 All in all, Majority Commissioners Charley Martin and Rob Loughery say things are going well for Bucks. Unemployment is consistently lower than the state average, and Standard and Poors has given the County a premium AAA bond rating two years in a row. Considering the difficult challenges facing communities everywhere, Bucks has endured the worst of the recession and prospered. And it’s thanks to Republican leadership.

PoliticsPA talked with the men seeking to extend Republicans’ control of the Bucks County courthouse.  Click here to read our interview with the Democratic candidates – Commissioner Diane Ellis-Marseglia and Doylestown Borough President Det Ansinn. Our preview of this “Race to Watch,” will be posted later today.

“Whether it’s running our award-winning nursing home, whether it’s providing services to our veterans – we proudly exceed any county in PA – whether its our emergency services or community colleges or libraries,” said Martin, “I think we have kind of an enviable record here in Bucks County that we want to place before the voters.”

“Not only have we not raised taxes in the last 5 years, we have a triple-A bond rating and a rainy day fund that’s better than ten percent of our operating budget,” said Loughery. “These things didn’t happen overnight. Our pensions are funded. They were planned accordingly with Republican leadership and have put us in the position to weather the storm.”

Martin, 69, has been married for 34 years. He has a daughter and two grandchildren, ages 10 and two and a half. He worked for 30 years at the Philadelphia Electric Company, rising to the position of public affairs officer by the time he retired in 1995. He served 12 years as Supervisor of Upper South Hampton Township from 1983-1995.

Martin has served on the Board of Commissioners since 1995. He’s won election four times, and says this would be his fifth and final term.

“The new justice center is getting underway [Tuesday],” he said, referring to the largest public works project in Bucks County history, which broke ground yesterday. “I’ve been involved in that project intimately since its inception a decade ago. I think it’s important to stay with that project until it is completed and the construction time is probably, if things go well, somewhere two to two and a half years from now.”

Relatively speaking, Loughery is brand new. He was appointed to the Board earlier this year after Commissioner Jim Cawley was sworn is as Lieutenant Governor.

“I certainly have my work cut out for me,” he acknowledged. “While I’m a new face from the elected official side, I don’t think a new entity. I’ve spent most of my life in Bucks county, raised here, I lived in Upper Bucks. I spent the last 15 years of my career in business and economic development in lower Bucks County.”

Loughery is 41, married and has three daughters ages eleven, nine and seven. He’s a partner and founder of the Keystone Redevelopment Group, a real estate investment LLC that redevelops old industrial properties and brownfields. In the 90s, he worked for the Bucks County Redevelopment Authority and the Bucks County Economic Development Corporation. He boasts activity on a dozen area civic organizations and committees, but this is the first time he’s held public office.

Moreso than their Democratic counterparts, Martin and Loughery are reliant on the county party for their day-to-day operations. They campaign out of party headquarters, where three staffers manage Bucks GOP business.

“There’s a larger Republican ticket that includes row officers. We are coordinating seamlessly with the Republican team through Republican headquarters, but as in any campaign we will have a Martin-Loughery team that supplements the efforts of the party,” said Martin. “We have plans to bring on staff, coordinators, et cetera.”

“Between our committee, Rob and myself, we’re probably approaching $100,000 at this point,” guessed Martin. The Democratic candidates told PoliticsPA that they’ve raised around $140,000. “We’re collecting revenues from a variety of sources and I would hope that we’ll certainly be successful to run a very credible, winning campaign.”

And Loughery isn’t concerned about the 191,778 to 178,057 voter registration edge of Bucks County Democrats.

“The deficit that we have voter registration wise hasn’t increased, it’s actually decreased. I think that you’ll see when it comes to the county elections, especially in Bucks County, people see and recognize the quality of life that they have here, and that’s been brought through Republican leadership. I think that’s how we trend different than you may see in the black and white numbers in the voter registration polls.

PoliticsPA asked each ticket for their “elevator speech” – the core 5 second message that they’d use to get a voter to stay on the phone, or keep from shutting the door.

“No county tax increase in the last 5 years,” said Martin. “That usually reopens the door.”

“After Charlie said that and has the door open, I think the next part is to express to the voters and to the residents just how solid financially the County is right now and I think that that will keep the door open another minute,” added Loughery. “I think that resonates with the voter when you consider that just how difficult turbulence has been both in the private and public sector.”

We asked Martin and Loughery to draw a contrast with their opponents.

“There’s a famous saying that I use a lot that I think is pertinent. Ben Franklin said, ‘Well done is better than well said,’” quoted Martin. “The other side, I haven’t really seen what they are envisioning other than having Commissioner Marseglia for the last 4 years as the voice of ‘no.’ I think people will look at our record and believe us worthy of another term.”

“I haven’t seen anything in terms of what they’re offering,” Loughery agreed. “There are challenges – there’s no doubt about that – there are areas that we need to continue to work on but we see the future and we want to look optimistically rather than just kinda always pointing to what’s bad.”

But Martin and Loughery say efforts to link them with courthouse misdeeds are politically, rather than factually motivated.

“Certainly we can’t deny there were individuals who were charged with misusing their office, two of them are no longer county employees and they will be dealt with appropriately by the Court of Common Pleas. For 2,600 county employees, that blip is very unfortunate,” said Martin.

“I’d have to say for folks who are alleging that the Commissioners either condoned that, knew about it, or whatever are sadly mistaken because the row offices operate somewhat independently of the commissioners. Other than approving their budget, we have very little real oversight of row offices. We certainly aren’t going to defend what those folks did, and they’re being dealt with appropriately in the right venue in the Court of Common Pleas.”

Loughery noted that Republican officials were essential in bringing the problems to light.

“It was a Republican Controller that took this information, saw an issue with it, and forwarded it to the Republican DA and now its being handled. It’s certainly not a good situation and no one is accepting of what happened there. It’s wrong. I think to say its a bigger problem is just not accurate. What [the Democrats] are trying to do – and I understand what they’re trying to do – they’re trying to be political and keep people away from looking at the real facts which is the record of the Republican County Commissioners.”

Both Republicans emphasized their belief that the election would be a local, rather than statewide contest. But Martin acknowledged that observers have reasons to watch Bucks County.

“I think when it comes to County Commissioner race it’s more of a local affair than it is a statewide thing. Sometimes the political world, they tend to think differently but when it comes to the voters and what they’re looking for in county government – I think it tends to be a matter more of local than statewide. Having said that, Bucks County been been blessed to have men, and women, who have gone on – Jim Cawley, Mark Schweiker, Mike Fitzpatrick – to make a great mark in the state. A lot of that is due to the efforts locally here in Bucks County and that, I think, resonates at the state level.”

Left unsaid by Martin, but often mentioned by GOP politicos talking about this race, is the view that Loughery is in line to join that list of names if he wins re-election this year.