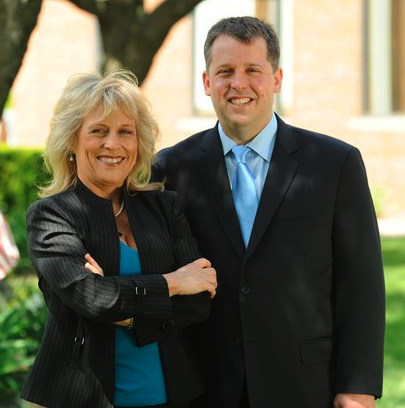 Commissioner Diane Ellis-Marseglia and Doylestown Borough President Det Ansinn have their pedal to the medal.  They say Bucks can’t afford another Republican administration that will sweep the County’s fiscal – and ethical – problems under the rug.

“When I came into office four years ago, we had $73 million in a rainy day fund. That’s what allowed our bond rating to go so high, but they have used it every single year to try to balance the budget,” said Marseglia. “Whoever goes to do the 2012 budget will be down to $36 million…”

“…and no longer will meet the standards for AAA bond rating,” Ansinn said. The pair seemed very much on the same wavelength throughout the interview. “You lose the no-tax-increase mantle when you’ve been liquidating the reserves of the County. There are opportunities for restructuring how the County does its business that are more effective and more cost effective.”

And that’s before we even get started talking about the scandals in the Bucks County courthouse.

“In politics, people often talk about how the party in power is corrupt. We’ve actually had indictments,” said Marseglia, in a common theme of the Democrats’ criticism of their opponents. “In the past four years we’ve had I think 20 scandals come up. We are presenting the voters with real concern.”

Click here to read our interview with the Republican candidates – Commissioners Charley Martin and Rob Loughery. Our preview of this “Race to Watch,” will be posted later today.

In a county that hasn’t been governed by a pair of Democrats for two and a half decades, this duo knows they have their work cut out for them.

For people who say women bring a needed perspective to government, Diane Marseglia is a case in point.

Marseglia, 50, is serving her first term on the Board of Commissioners. She’s a clinical social worker and teacher, areas which she notes encompass more than half of the purview of county government. She served as Middletown Township Supervisor for eight years, and school board before that.  A mother of two, her daughter Becky passed away a 16. Her other daughter, Katie, is 21.

Ansinn, 39, represents part of the shift in Bucks County over the past decade. When he was elected to Doylestown Borough Council in 2005, Democrats were in the minority. That changed over the next few years, and in 2008 he became Doylestown’s first Democratic Council President in a century.

Ansinn is a technocrat. His company BrickSimple develops apps for smartphones – iPhone, Android, etc – nationwide. He’s also a Twitter fiend. He routinely tweets 10 times a day or more, and that number is actually down since the campaign began. He’s married with three children ages eleven, eight and three.

“Up until four years ago, Bucks County Dems never ran a team for Commissioner and when I ran 4 years ago we did that. Det and I have gotten it down and it’s much easier to run and win as a team,” said Marseglia.

“And we have an army of volunteers,” added Ansinn. “Diane and I share a single organization for running as a team, so we have that whole organization working for us. It is separate from the county party…”

“…but we’re close,” Marseglia said. “We’re working together with the county party. We’re using the county party headquarters as our office and sharing it with them. I sometimes have hourly contact with party chair.”

Asked if they are underdogs, Marseglia agreed.

“Sure, everybody loves an underdog,” she laughed. However, they’re not behind when it comes to fundraising. They’ve brought in approximately $140,000 so far – about $40,000 more than their Republican opponents.

PoliticsPA asked each ticket for their “elevator speech” – the core 5 second message that they’d use to get a voter to stay on the phone, or keep from shutting the door.

“County government is about services. We can do it cheaper and we can do it more effectively,” said Marseglia. Ansinn agreed.

“One of the areas there, ironically here in Bucks County – it’s been Diane pushing for streamlining, including the creation of an economic development officer which Montgomery county has, other Philadelphia-area counties have. County government hasn’t really done anything proactively to keep business in Bucks County and that’s reflected in employers leaving and the population aging. For myself as a small business person, that’s important.”

“We need to do something about economic development. Republicans have been in control for 82 percent of the past 100 years. They’ve been in the control since the steel mill closed and, they’ve done nothing,” said Marseglia.

We asked Marseglia and Ansinn to draw a contrast with their opponents.

“When you look at a social worker and a business person, that combination of those two perspectives, it’s a perfect overlap of what county government actually does,” said Ansinn.

“Over 50 percent of the county business is social services to people who have specific needs, and the rest of it is services to all of us,” said Marseglia.

“I’ve been proposing millions of dollars of cuts since I’ve been there. For example, we don’t have a drug court in Bucks County and other surrounding counties do. That costs $5,000 a year compared to $20,000 dollars for the county prison. We have five people in our public information office. What’s up for that? We don’t need five people to try and spin the news.”

“One of the row offices here in Bucks County, their claim to fame is that they haven’t changed their headcount in 20 years. With the advancements in technology, do we really need to replace every retirement?” Ansinn asked.

It’s indicative of culture of corruption, say Marseglia and Ansinn, the result of too many years of one-party management. And they reject the notion that the Republican Majority Commissioners had nothing to do with it.

“The reality is that Bucks County is a crossroads. The amount of corruption in that office its not just unethical, it also costs taxpayer money,” agreed Marseglia. “They had been told to cut it out. They didn’t listen, and these are things that are known to party members.”

Bucks County is a bellweather for the rest of the state. A Democratic win here would signify good news for the party in 2012, and Dems statewide are taking notice.

“The state party is very interested,” said Nagy. “It’s a very important County for them, as are many of the counties around Philadelphia, and I believe that they will be extremely active when we start to communicate to voters in a paid capacity. We’re definitely one of the tops on their radar.”

How Do They Overcome Recent History?

“In Bucks County, the wins for Democrats have been few and far between. If you look at this year and this race and go back to ’83, you’re talking 6 cycles of non-victories,” said Ansinn. “Diane and I are hoping to break that trend.”

Democrats have been out of the majority of the Bucks County Board of Commissioners for two and a half decades. Marseglia and Ansinn explained why they think this is the year to turn it around.

“The last off year, when [State Rep.] Steve [Santarsiero] and I ran in 2007, we were 20,000 Democrats down. We’re almost 14,000 up now, so even though it may have trended towards Republicans in the off years in the past, this is an unknown number of Democrats that we haven’t had until this time.”

Ansinn interjected a little history that he light-heartedly said could help this year.

“The last time there was a majority in the County Commissioners was in the ‘83 election cycle and interestingly enough it was a candidate from Middletown and a candidate from Doylestown like Diane and myself. We’re actually running a geographic distribution that works.”