Michelle Obama: Vote Hillary or Else 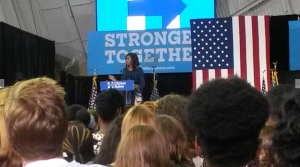 The nation’s 44th First Lady traveled to Philadelphia today to campaign for the woman who was once America’s 42nd First Lady and may become the 45th President of the United States.

A healthy number of college students and nearby residents filled the Tom Gola Arena and thanks to the predominantly young female audience and the acoustics of the gym, the enthusiasm could at times be deafening.

Michelle Obama, perhaps the most popular public figure in the country, made it her mission to convince the disinterested to make their voice heard on November 8th. It’s clear she understands that the most important choice her targeted audience can make is not between the two candidates, but rather action and inaction.

“Elections aren’t just about who votes, but who doesn’t vote,” she explained. “And that is especially true for young people like all of you. In fact, in 2012, voters under the age of 30 — you provided the margin of victory for Barack in four key battleground states: Florida, Ohio, Virginia, and right here in Pennsylvania. You all did it. But hear this: Without those votes, Barack would have lost those states. He would have lost that election.”

She went on to describe that Barack Obama’s margin in Pennsylvania that year was 300,000 votes, which broke down to 17 per precinct. The First Lady remarked about how easy it would be for those in attendance to get seventeen people to vote, and also how easy it would be for them simply not to. Decisions like those, she pointed out, decide elections.

Additionally, Michelle’s speech was in many ways a continuation of her acclaimed address to the Democratic National Convention. The advance team cut out letters on the curtain behind her to quote from her address, “When they go low, we go high.”

As a result, the First Lady did not mention Donald Trump by name (a maneuver likely done intentionally to needle the famously thin-skinned candidate). That doesn’t mean, however, that the spectre of a Trump Presidency didn’t hang in the air as a warning to the assembled supporters.

“There are those who questioned –- and continued to question for the past eight years –- whether my husband was even born in this country — and let me say, hurtful, deceitful questions deliberately designed to undermine his presidency,” she asserted. “Questions that cannot be blamed on others or swept under the rug by an insincere sentence uttered at a press conference.”

“A President just can’t pop off or lash out irrationally. No, we need an adult in the White House.”

Obama also introduced a new line that is sure to be used across the country over the next six weeks. 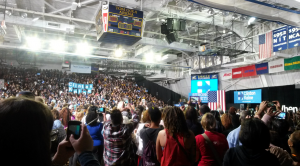 “So we cannot afford to squander this opportunity, particularly given the alternative. Because we know that being President isn’t anything like reality TV,” she stated, landing a jab at the GOP nominee’s colorful past. “It is not an apprenticeship. And it is not just about fiery speeches or insulting tweets. It’s about whether someone can handle the awesome responsibility of leading this country.”

The core of her message, though, was clear. Anything but a vote for Hillary Clinton is a vote for Donald Trump.

“You could also help swing an entire precinct for Hillary’s opponent with a protest vote or by staying home out of frustration,” she made clear. “Because here’s the truth: Either Hillary Clinton or her opponent will be elected President this year. And if you vote for someone other than Hillary, or if you don’t vote at all, then you are helping to elect Hillary’s opponent. And the stakes are far too high to take that chance, too high. Remember, it’s not about voting for the perfect candidate — there is no such person. In this election, it’s about making a choice between two very different candidates with very different visions for our nation. So the question is: Do you want Hillary Clinton to be your President, or do you want her opponent to be your President? That is the choice in this election.”

The Trump camp is well aware of the First Lady’s goals.

“Hillary Clinton’s Pennsylvania campaign is on the run — they’re in panic mode,” Trump Campaign Senior Advisor in PA David Urban stated. “The most recent Muhlenberg, CNN, Harper, and Mercyhurst polling shows that Mr. Trump is surging in Pennsylvania and this race is a deadlocked. Hillary Clinton’s disconnect with millennials and African American voters is unprecedented for a Democratic candidate. On the other hand, Mr. Trump is building a diverse coalition of supporters across the Keystone State with large representation by these two groups Hillary Clinton has losing because of her corruption and stale policies.”