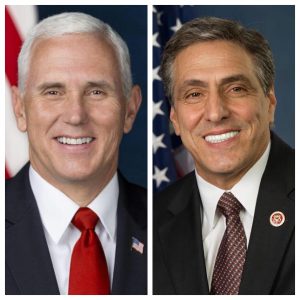 Today, Vice President Mike Pence returned to the city of Philadelphia for the second time in as many months for a GOP fundraiser. The President took to Twitter tonight to express his approval of the VP’s visit to Philadelphia and the need to elect one of his “first supporters” to the Senate.

Lou Barletta was one of my first supporters. He is tough on Crime and Borders. Will be a great Senator from Pennsylvania. His opponent is WEAK on Crime, ICE and Borders. We need Lou! https://t.co/dcMSi4CPfb

Just today, the Philadelphia Inquirer published a Pence op-ed titled, “Our agenda is working for Philadelphia” where he states, “the typical family of four in the Philadelphia area will save nearly $2,500 on their taxes every single year.”

Although the focus of the event was centered around the tax reform bill and Barletta’s campaign, Pence spent the first several minutes of the address discussing Immigration Customs Enforcement (ICE), national security, and touting the phrase “promises made, promises kept”.

“It’s amazing to think that some leading Democrats across this country are actually calling on us to abolish ICE,” Pence said followed by boos. With holding onto a majority, Pence promised that their administration “would never abolish ICE” and that the Trump administration had already “started building that wall”.

To Iranian President Rouhani: NEVER, EVER THREATEN THE UNITED STATES AGAIN OR YOU WILL SUFFER CONSEQUENCES THE LIKES OF WHICH FEW THROUGHOUT HISTORY HAVE EVER SUFFERED BEFORE. WE ARE NO LONGER A COUNTRY THAT WILL STAND FOR YOUR DEMENTED WORDS OF VIOLENCE & DEATH. BE CAUTIOUS!

“As he made clear again last night, we will no longer tolerate Iran sewing violence or terror across the world and we will not tolerate threats against the United States of America,” Pence said.

Pence painted Casey as too liberal of a politician for the people of Pennsylvania and described the GOP candidate’s life as having “lived the American dream”.

Barletta, who has closely aligned himself with President Trump mainly touted the current state of the American economy and credits the Trump agenda for making the economy work.

.@RepLouBarletta credits President Trump, says business now has to train workers to fill existing jobs. “That’s all good stuff. And this is only in a year and a half. If we make the tax cuts permanent I think you’re going to continue to see the economy roar.”

The Democratic National Committee was particularly critical of the tax cuts and Barletta’s vocal support for President Trump.

She continued her criticism of Barletta for “sabotaging our healthcare system, separating families at the border, and passing a tax bill that benefits the wealthiest among us at the expense of middle-class families.”

“They are cutting taxes for their special interest cronies while wages for working Pennsylvanians are falling and jobs are being shipped overseas,” Mills said. “They are endangering the health care for hundreds of thousands of Pennsylvania seniors and people with pre-existing conditions.”

Barletta’s campaign raised over $1 for the second consecutive quarter, but trails incumbent Sen. Bob Casey in cash on hand $9.8M to $1.56M.

After the address, Pence is set to lead a fundraising event for Barletta at the Union League in Center City.

Update was made with a tweet from President Trump.