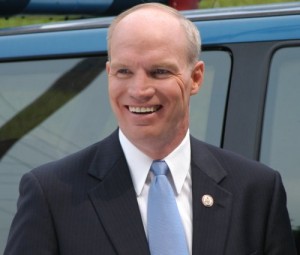 The stop came after a tour of Nazareth’s guitar maker C.F. Martin & Company, and before a fundraising event later that day. Before both men arrived, a small crowd of local politicians ― including Easton Mayor Sal Panto ― reporters and photographers had gathered in the street outside.

Once inside, Hoyer said to reporters that Holden is one of the most hard-working, decent men in Washington. He also touted Holden’s record as a congressman and reaffirmed many of the things that he had said in a press release from the Holden camp Wednesday.

In a previous report, Holden emphasized that he is focusing on jobs and the economy as a top campaign issue. And, when asked about what Holden brings to the table, Hoyer said that Holden is one of the best members of Congress.

“He supports hard-working people, from factory workers to small-business owners, and is against trade deals that export American jobs,” said Nagy.

The lunch consisted of local elected officials chatting amongst themselves, a few photo opportunities, and a meal and meeting Holden’s staffers.

Holden will have some work to do in Easton, which is new to the district.

When asked about if Eastonians are familiar with Rep. Holden, resident and deli customer Sadie Ferriera said she didn’t know of Holden before today.

This reporter asked several other diners in the restaurant, as well as an Easton police officer on duty, if they knew who either Holden and Hoyer is. All of them were unfamiliar with him.

Holden has made a recent push within the Easton and Northampton County areas (he opened his first campaign office in downtown Easton last week).