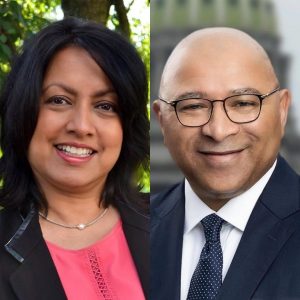 A pair of Pennsylvania Democratic statewide incumbents hold several point leads over their GOP challengers, while the race for the Auditor General open seat is in a dead heat.

A Monmouth University poll released on Wednesday morning of registered voters in the state shows Attorney General Josh Shapiro and Treasurer Joe Torsella leading in their reelection bids, while Democrat Nina Ahmad and Republican Tim DeFoor are neck and neck for the Auditor General race.

Shapiro leads Heather Heidelbaugh, a former Allegheny County Councilwoman and Pittsburgh-area attorney, by 10 points, 51-to-41, in the race for Attorney General among registered voters in the state, while 7% remain undecided. Torsella leads Stacy Garrity, an Iraq War veteran and businesswoman, by 5 points, 45-to-40, among registered voters in the state in the race for Treasurer, while 13% are undecided. In the race for Auditor General, 43% of registered voters said that they would vote for Ahmad, a former Deputy Mayor of Philadelphia, while 41% said that they’d vote for DeFoor, a Dauphin County Controller, and 12% that said they are undecided.

Shapiro leads Heidelbaugh by 11 points, 52-to-41, among likely voters in the high turnout model, while 6% remain undecided. The margin narrows again just slightly among likely voters in the low turnout model with Shapiro leading Heidelbaugh by 9 points, 51-to-42, with 6% remaining undecided. Shapiro’s lead in all three models are beyond  the poll’s margin of error.

While each candidate has overwhelming support within their party, two of the Republican candidates have the edge with Independent voters polled.

Monmouth surveyed 400 Pennsylvania registered voters from Aug 28 to 31. The poll has a margin of error of +/-4.9%. FiveThirtyEight gives Monmouth an “A+” rating, although the poll does slightly leans towards Democrats.