The ad, which is set to hit the air in Pennsylvania, New Hampshire and North Dakota, doesn’t pull punches. 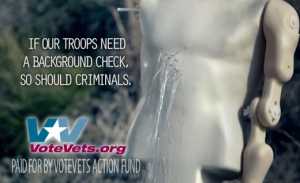 Sporting an AR-15 semi-automatic rifle, Iraq War Veteran and Purple Heart recipient Glenn Kunkel says, “I had to pass a background check to join the Marine Corps, before I could carry a weapon similar to this one in Iraq. Here at home, anyone can purchase this weapon, no questions asked.”

After firing several rounds into a water-filled mannequin, Kunkel continues, “I support the Second Amendment, but we’ve seen what can happen when these fall into the wrong hands.”

Then, a picture of a memorial for the victims of the Sandy Hook Elementary School shooting appears on the screen.

The ad calls for universal background checks but does not mention an assault weapons ban or any other similar gun control measures, as many gun control advocates previously had sought.

This call for universal background checks has seen broad support among Pennsylvania voters according to recent PA Polls.

A Quinnipiac poll showed 95% of Pennsylvanians support new background checks, while Franklin and Marshall found 94%. Democratic pollster Douglas Schoen asserted it’s 88% and the number is 81% according to Mercyhurst.

VoteVets.org has promised to spend $50,000 of the total ad buy in Pennsylvania alone, with the hope of pressuring PA lawmakers to vote for these background checks.

That kind of cash doesn’t buy a whole lot of TV in the state, so it’s not likely to be a sustained presence. It probably will air a few times on prime time news in various media markets.

The first of these votes will be in early April as Senate Majority Leader Harry Reid (D-NV) recently introduced his gun control bill last week, which features background checks as a main component.

The debate for this bill has already begun and local Republican lawmakers have previously hinted that they would consider limited new gun measures like better background checks.