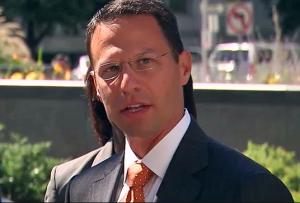 Ever since the very first forum, it’s been clear that Northampton County DA John Morganelli does not care for Montgomery County Commissioner Josh Shapiro.

Morganelli took it step further on Monday, though, when he accused his opponent of being improperly influenced by campaign donations. He pointed to six instances where Shapiro voted to award contracts to businesses that had or soon afterward donated to his campaign.

“He runs around with ethics and integrity on his sleeve, but where is that same standard when it comes to his own conduct?” Morganelli asked. “Are the folks of Montgomery County paying attention to what is going on here inside this courthouse?”

Meanwhile, the Zappala campaign issued a statement praising their candidate for not doing what Morganelli alleges Shapiro did.

“Stephen Zappala has an eighteen year record as the Allegheny County District Attorney taking on pay-to-play and convicting powerful politicians of corruption, including a sitting supreme court justice,” Zappala Campaign Manager Marty Marks said. “Zappala is the right candidate to take on the Harrisburg status quo.”

As you would expect the Shapiro campaign didn’t take this lying down, hitting Morganelli for his past electoral losses as well as tossing in some allegations of their own.

“It’s sad to see John Morganelli flailing away with these desperate attacks, motivated by his frustration at losing a fourth-straight statewide campaign,” Shapiro Campaign Manager Joe Radosevich stated. “These totally false claims are recycled from the past, and Morganelli was literally laughed at by an audience when he tried to use this same attack earlier this month. It’s hard to take Mr. Morganelli seriously when he takes tens of thousands of dollars from defense attorneys who he negotiates cases with every day in the courthouse.”

After defending his candidate, Radosevich then went after Zappala for seemingly teaming up with Morganelli.

“Furthermore, it’s becoming clear that John Morganelli is running a kamikaze campaign focused on Josh Shapiro,” he wrote. “Why else would he publicly praise Stephen Zappala today, and state at a recent forum, ‘if you don’t vote for me, at least vote for Zappala,’? And why wouldn’t he have brought up today the well-documented fact that Stephen Zappala awarded no-bid contracts to his old law firm, and has then received undisclosed payments from them?”

The Democratic primary is scheduled for April 26th.