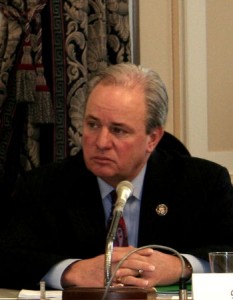 All but one of Pennsylvania’s representatives in the U.S. House voted on Monday night to approve the debt ceiling compromise reached by President Obama and congressional leaders.  The bill, which passed the House 269 to 161, is expected to be debated and passed in the U.S. Senate around noon on Tuesday.

“I believe the federal government’s skyrocketing national debt is a problem the United States must fix – and that it will require substantial sacrifice for us to do so – but I strongly oppose the approach taken in this bill, which I believe to be both counterproductive and unjust,” Doyle said in a statement released by his office.

The veteran Democrat also made headlines on Monday for his aggressive criticism of Tea Party Republicans.  “We have negotiated with terrorists,” Doyle said in a closed-door huddle in the hours before the vote, according to Politico’s Jonathan Allen and John Bresnahan. “This small group of terrorists have made it impossible to spend any money.”  Vice President Joe Biden reportedly agreed, according to sources in the room.

The New York Times reported Tuesday that the U.S. Senate is “very likely” to approve the measure, sending to President Obama’s desk just hours before Tuesday’s deadline will expire.

If so, the measure will garner the President’s signature without the support of U.S. Senator Pat Toomey, who said Monday night that he would vote against the deal because it “simply does not contain meaningful spending cuts.”

“Unfortunately, the debt ceiling deal announced last night does nothing to deal with the path of our government’s unsustainable deficit spending,” Toomey said in a statement released by his office.  “For fiscal year 2012, this legislation will only cut two-tenths of 1 percent of total spending. Not only will our debt grow each year under this plan, it will continue to grow even as a percentage of our economy.”

The freshman GOP senator also expressed skepticism that the long-term spending cuts prescribed in the agreement would actually materialize.  “If Congress is truly serious about cutting spending, it would mandate serious spending cuts in next year’s budget – the only year in which cuts are actually guaranteed,” Toomey said.

“No compromise is perfect and the process that has brought the country to the brink of default is unconscionable,” Casey said.  “The country is running out of options to avoid further economic harm.”

Indeed, in public comments addressing the deal, nearly all of the Commonwealth’s congressional class noted that while the tentative framework was not ideal, it was preferable to entering Tuesday’s deadline without a deal in place.

In a prepared statement released by his office Monday afternoon, Congressman Patrick Meehan (PA-7) deemed the compromise “a serious and substantive effort to rein in our out-of-control spending and establish long-term deficit savings.”

Democratic Rep. Tim Holden (PA-17) said on Monday the proposal was “by no stretch of the imagination a good deal.”  In a statement distributed by his office later Monday evening, Holden elaborated on his reasons for ultimately choosing to support it.  ”The political wrangling of the last few weeks has been frustrating to say the least and has left a bitter taste in the mouths of the American public.  While the compromise reached yesterday by the President and congressional Democrats and Republicans is not perfect, it reflects what Americans want from their elected leaders: working together to find solutions to the problems facing our country.  I will be supporting this compromise legislation, as allowing America to default on its payments is simply unacceptable.”

In a statement released by his office Tuesday evening, Congressman Jason Altmire (PA-4) sought to portray the agreement as the act of centrism craved by Americans.  “Addressing this nation’s fiscal responsibilities can’t be done by listening only to the views of extremists of either political party.  All along, I’ve called for a centrist approach to reduce spending and lay the groundwork for long-term deficit reduction,” Altmire said in confirming his intention to vote for the measure.  “The American people wanted compromise, a solution from the middle, and today Democrats and Republicans delivered that to them.”

Meanwhile, Pennsylvania Democratic Party Chairman Jim Burn sounded his own note of approval for the pact, asserting that failing to raise the debt ceiling could have “severe economic consequences” for Pennsylvanians.  “The deal in place will protect and preserve Medicare and Social Security – programs that Republicans have attacked for months – and it also puts us on a path toward fiscal responsibility,” Burn said in a statement emailed to PoliticsPA.