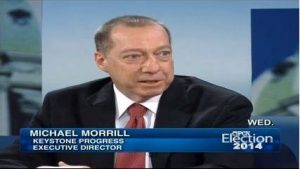 “I have been honored to be the executive director of Keystone Progress,” Morrill said in the announcement.

Since it was founded, Keystone Progress has built a statewide network of supporters, and created both an online and traditional grassroots organization.

“Mike created and built an incredible organization that has had a huge impact on Pennsylvania politics,” Keystone Progress board chair Ritchie Tabachnick said in a release announcing the move.

In the announcement they named Daniel Doubet as the next Executive Director.  Doubet is currently the northwest Pennsylvania lead organizer for the organization.  He was picked after a six-month national search.

“While we are disappointed to see Mike leave, we are thrilled that Dan Doubet will be leading us during this tumultuous time,” Tabachnick  said.

“I’m excited about Dan taking over for me. He has the passion, the skills and the experience to bring Keystone Progress to even greater heights,” Morrill said.