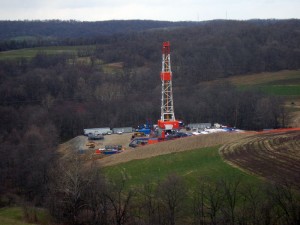 It’s no secret that Gov. Tom Wolf wants to enact a severance tax on natural gas. One organization, though, is trying to have its say before Wolf’s plan becomes reality.

A new poll from the Marcellus Shale Coalition found support for the severance tax at just below 50 percent, with 35 percent opposing the tax and 15 percent unsure.

A solid majority of Democrats (63 percent) backed the severance tax, as well as 54 percent of independents. Just 33 percent of Republicans were supportive.

Since he was campaigning, Wolf has pushed for a 5 percent severance tax on natural gas drilling, aiming to use the profits pay for education. The proposal includes a measure that taxes 4.7 cents for every thousand cubic feet of gas drilled — a similar policy to neighboring West Virginia.

Wolf’s severance tax proposal, dubbed the Pennsylvania Education Reinvestment Act, will be just one of the plans he reveals in his first budget address, scheduled for Tuesday in front of the Grand Assembly. The Governor unveiled part of his budget proposal in Bethlehem last week, all of which will need to be approved by the GOP-controlled legislature.

Wolf expects his severance tax plan will bring in one billion dollars by the 2017 fiscal year, enough to restore cuts made to the state’s education system.

Despite this benefit, the MSC poll reported that more voters opposed the tax after considering their side of the debate. Opponents to the severance tax argue that Wolf’s plan will cost Pennsylvania jobs.

When asked whether they would still support the tax if it causes Pennsylvanians to lose their jobs, a majority of voters from both parties said no. In this case, 78 percent of Republicans, 68 percent of independents and 52 percent of Democrats opposed the tax.

In a similar vein, 67 percent of voters favored creating new jobs in the natural gas industry over raising taxes on natural gas producers. Just over a quarter (26 percent) favored the latter, while 7 percent were unsure.

Overall, the poll found Pennsylvanians supportive of the natural gas industry. A solid majority (64 percent) of voters indicated they would be more likely to vote for a politician who encouraged the industry’s growth in Pennsylvania.

However, more than a quarter of voters (35 percent) feel taxes on natural gas producers are too low, while 26 percent feel they are too high, 23 percent say they are just right and 16 percent are unsure.

The MSC is an organization that gathers and distributes information about the positive impacts of natural gas production to lawmakers, regulators, media and other industry influencers. With Wolf’s budget address fast approaching, this poll is a last-minute effort by the coalition to shape policy making.

It is also important to recognize that this is not an independent poll. A independent, non-partisan poll has only one goal: to understand and illustrate how the public feels about a certain issue or issues.

A poll commissioned by an interested party, as the MSC is on natural gas drilling, has two goals: understand how the public feels about an issue and discover how to best present their views to the public.

Anderson Robbins Research, directed by well-known Democratic pollster Chris Anderson, conducted the severance tax poll for the MSC. The poll surveyed 804 voters by telephone between Feb. 19 and 22. The margin of error is +/- 3.5 percent.