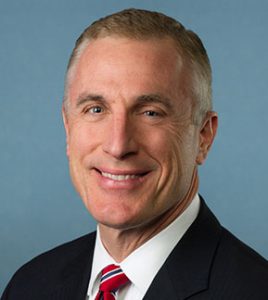 Congressman Tim Murphy announced he will not be running for re-election next year amid a scandal involving an extra-marital affair, accusations he pushed for an abortion, and claims of a hostile work environment.

“After discussions with my family and staff, I have come to the decision that I will not seek re-election to Congress at the end of my current term,” Murphy said in a statement.

It was recently revealed that Murphy had asked the woman he had an affair with to consider an abortion during a pregnancy scare.  A memo was also released detailing what his chief of staff described as Murphy’s “hostile, erratic, unstable, angry, aggressive and abusive behavior” in the office.

The resignation creates another open seat in Pennsylvania, leading Republicans to eye a run.

Rumors are that state Senator Guy Reschenthaler (R-Allegheny) has been in contact with elected officials in the district asking for their support.  State Senator Kim Ward (R-Allegheny), Allegheny County Councilman Sam DeMarco, and County Party chairman D. Raja are rumored to be eyeing the seat as well.

Below is Murphy’s complete statement.

After discussions with my family and staff, I have come to the decision that I will not seek reelection to Congress at the end of my current term.

I plan to spend my remaining months in office continuing my work as the national leader on mental health care reform, as well as issues affecting working families in southwestern Pennsylvania.

We have accomplished much in the past year through the Helping Families in Mental Health Crisis Act and there is much work yet to be done.

In the coming weeks I will take personal time to seek help as my family and I continue to work through our personal difficulties and seek healing. I ask you to respect our privacy during this time.